Are you in the mood to have a spook-tacular time today? Okay, that WAS pretty lame, but it’s Halloween…. We can be something we usually aren’t. I’m not usually lame. ?

Halloween Pumpkins Live Wallpaper is a fun little live wallpaper for Android devices to get you in the mood for dressing up and going to a party or out trick or treating with the kids.

What I thought made this Halloween live wallpaper worth the review was the style of art. It is in between being cheesy cartoonish and Tim Burton style. The expressions on the pumpkins make me think it is the something Tim would draw. But then again, some of the art looks like it is right out of a Dr. Seuss book.

The wallpaper doesn’t have a lot of movement. The owl blinks and you’ll see a witch flying across the screen. Other than that it is pretty tame which means the battery draw should be minimal. You can turn on the light in the house and play with the pumpkins a little. When you touch a pumpkin, they explode then grow back with the same facial carving as before. The pumpkin head scarecrow in the field also lights up or dims with your touch. 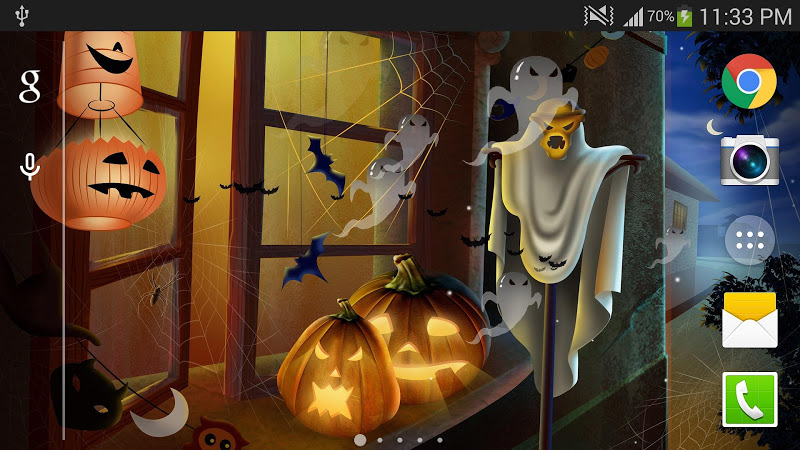 Touching the moon will turn on some creepy late night sounds including crickets, owls, crows, wolves howling and creaky doors.

Setting the live wallpaper is like any other. Usually you will press the screen and select Wallpaper–Live Wallpaper–Halloween Live Wallpaper Free.

If you want to step it up a notch, you can use these Halloween ringtones too.

Some other Halloween live wallpapers to check out are: