For those of you familiar with the Zune desktop software or Windows Media Center you’re no doubt familiar with how both of these programs scan your music library and tile the album art in the background. Applying the same concept to Android via a Live Wallpaper is Album Art Live Wallpaper.

Album Art Live Wallpaper is a configurable Live Wallpaper for Android 2.1+ devices that reads the album art from your music library and tiles it behind your icons. You can specify opacity, and even render the images in grayscale. To ensure your wallpaper never gets old it periodically rotates though your library.

One thing I really enjoy about the Zune and Media Center album art wallpapers are the varying tile sizes based on number or frequency of plays, which this Live Wallpaper does not have. I also like how the desktop wallpapers “swim” in a gentile animation, again, something this app does not have.

The app comes in two varieties, a demo version that prints the word “DEMO” in green across many of the tiles, and a paid version that does not. The paid version is £0.99 (about US$1.51). Both are available by searching for Album Art Live Wallpaper in the Market.

This app works better with a large music library (not so well with just a handful of songs), which is somewhat limited by the size of microsd cards. Also, on my Android, the paid version never found any album art, but the free version picked up everything on my sdcard. I’m certain this was a fluke and don’t expect that you’d run into a similar problem. 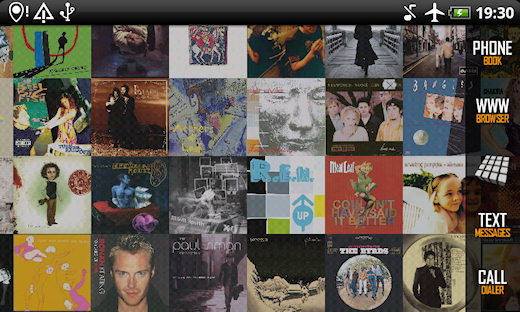 UPDATE: The developer contacted me regarding the issue I had with the paid version and, like I suspected, it was a fluke. Everything is working fine now. It’s app developers doing stuff like this that really impresses me about the Android platform! Thanks, Dave!

If you’re at all into music, this Live Wallpaper definitely deserves a place on your Android.