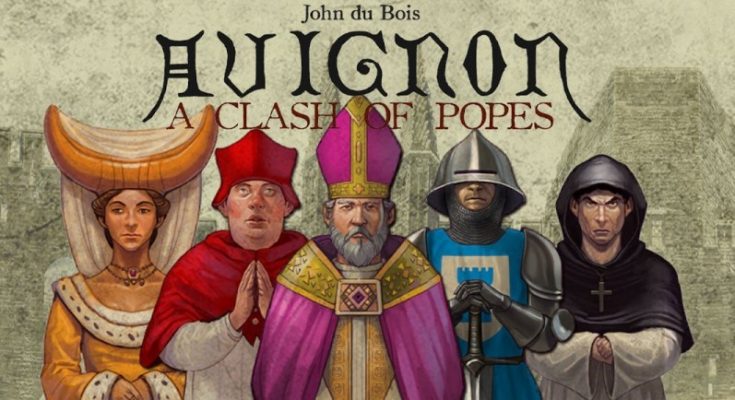 Released by Semag Studio LLC, Avignon: Clash of Popes is a tabletop game that’s just been ported over to Android. Set in the 14th century, players assume the role of the purported next pope, only to see the job usurped by someone else.

This then kicks off power plays between rival candidates, who hope to grow their own influence by growing their congregations. Between the two players rests a row of five cards, each representing a different character type: Knight, Bishop, Cardinal, Noble, Peasant, and so on. Each of these have a different ability that allows players to manipulate how close the characters are to one side or the other.

For example, when it’s the player’s turn, there are typically four options available, with any two being taken in a turn (save for the opening move, which is limited to one). Beseech draws a character closer to you, Chastise pushes a character away, Petition allows use of a special ability, and Excommunicate where that card is immediately discarded and replaced by one in the draw deck. So, special abilities include moving multiple cards in one direction, triggering special win conditions, and more. The game is typically won when one of the players manages to get three characters into his/her respective congregation. The game also has an expansion pack that includes new cards such as the Priest, Evangelist, and Guildmaster. This expansion also allows players to customize which cards are used in gameplay. The game can be played solo against the AI, or against another player. 2 player modes are either Pass and Play, or “Tabletop” mode where players sit in opposite sides of the phone and the screen will flip to out is properly oriented for each player’s turn. Avignon’s base game is already available from Google Play for a flat cost of $0.99. There’s an IAP for the expansion pack, also costing $0.99.

Playboard is down, so for now here’s the play store link.

Previous PostShadow Blade: Reload a Year Later, and Finally Gets to Android Next PostFloorvana by Shaw Floors for Android Review