Twitter’s overnight Internet fame stems from one simple question: “What are you doing?” You have 140 characters of text to answer, and as soon as you hit Update, the site’s millions of users can see what you’re up to. This small idea has blossomed into a hugely popular phenomenon, with its users covering the entire Earth, developers creating scores of helper apps for it, and a raft of imitation sites. This is the “social-networking and microblogging” site where you can read fascinating and mundane quick takes such as “ate a piece of cherry pie” or “just had a great workout.” But despite the service’s seemingly trivial function, which causes many to snub it and can at times make it akin to listening to other peoples’ cell-phone conversations, Twitter fills a gap left by other forms of communication.

After a simple sign-up involving the standard username, password, e-mail, and CAPTCHA entries, you can join the conversation, adding text to the “What are you doing?” box. Each Twitter entry, aka “tweet”, is followed by a time stamp and its source. Clicking on the time stamp brings up a page of the tweet alone. If you don’t want everyone in the world to be able to see your tweets, you can make them private and visible only to people you approve by checking the Protect my updates box. It’s all or nothing: All your posts will be either public or private. I’d prefer to see more options that would let you make some posts public and others private. It doesn’t seem as if this would be particularly difficult to implement—blogs have had this ability for years. 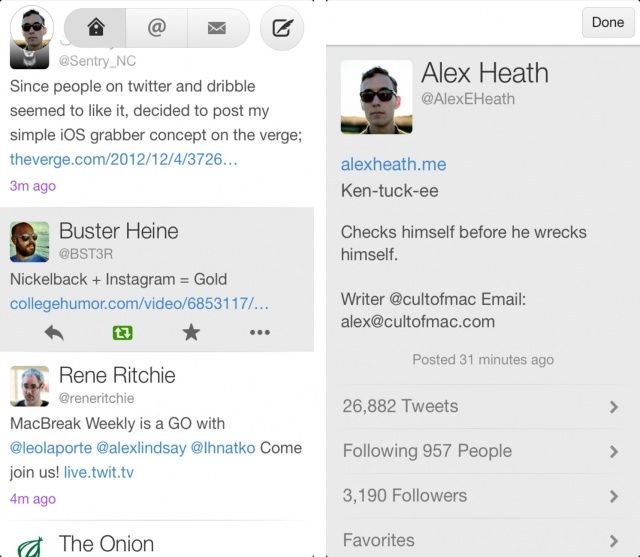 But posting via the Web site is hardly the whole story. Since the post size limit fits within the SMS 160-character limit, one of the features that adds immediacy to Twitter is the ability to update your posts from a cell phone. You can do this by sending a message to the service’s short code, 40404, after you’ve verified your phone number. (Short codes should be familiar to you from TV promotions that ask you to vote via text message—these are reserved numbers that work just like telephone numbers.) Finally, you can make a post through AIM, Jabber, Gmail, .Mac, or LiveJournal instant messaging. This misses a couple of the big IM names—Yahoo! Messenger and Windows Live Messenger—but it still covers a lot of ground. Oddly, when I sent a post from IM, it was marked “from Web” at the end. If you send from your phone, the tag says “sent from txt.”

Once you enter a tweet you can’t edit it, but you can delete it by clicking the trash-can icon. A star next to every post lets you designate it as a favorite, and you can access all your favorite posts by clicking the Favorite link under Stats on the right sidebar. There’s no way to search posts based on text—something I think limits the usefulness of the site—but it’s a limitation shared by Jaiku.

In addition to being able to view everyone’s public Twitter posts, you can “follow” another user, which means his or her posts will appear in your Home page timeline, and you’ll have the option to receive text messages or IMs to alert you of your followed one’s posts. To find people to follow, you can click on Find & Invite at the top of the page. From here you can search for Twitter users in your Gmail address book, invite new friends, or search existing Twitterers. Once you find other users you can opt to follow them. You can also add people to follow on your phone. The icons of all the users you’re following will appear at the bottom of your right-hand sidebar. If there’s someone in cyberland that you don’t want to be followed by or don’t want as a friend, you can go to that person’s page and choose the Block link.

To respond to a post that strikes a chord in you, there are two options: You can reply publicly or Direct Text the original Twitterer. To reply publicly, Twitter uses another fairly counterintuitive method: You have to begin your response with “@” prefixed to the username of the Twitterer you want to reply to. This will be familiar to posters on non-threaded discussion boards, but I’d prefer a simple “Reply” link. Jaiku’s Comments feature handles this better, despite the argument that everything posted in these microblogs is a comment, so why the need for a separate comment feature?—Next: The Twitter Phenomenon