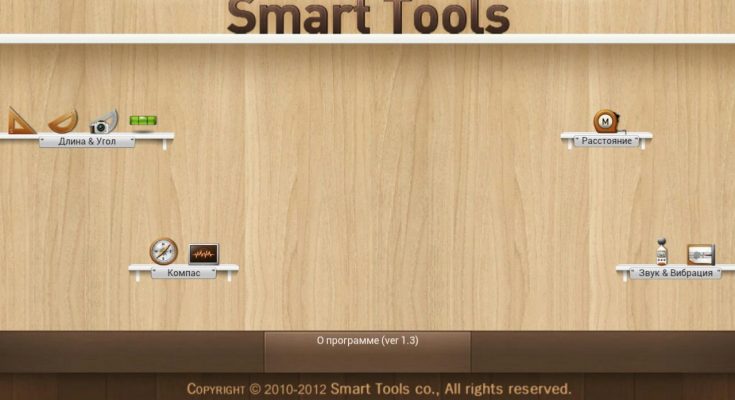 Smart Tools is an Android app that turns your phone into a Swiss Army Knife comprising ruler and protractor, tape measure, compass, flashlight and noise measure. As such it is probably best described as a collection of apps and, indeed, the composite parts are available as independent tools, often for free or at most 60p a pop.

The full set of Smart Tools for your Android smartphone and Android tablet reads like this (takes deep breath): Smart Ruler Pro which measures length, angle, slope and level; Smart Measure Pro (distance, height, width and area); Smart Compass Pro comprises compass, metal detector and GPS; Sound Meter Pro which measures sound and vibrations; and the flashlight app, inevitably known as Smart Light Pro. Not a bad little collection for just £1.60, especially when you consider that the individual Pro apps will set you back 60p each.

The Smart Tools work well, by and large. The combined app is well designed so that it looks good and works simply, making good use of Android’s dedicated settings button. In very few cases were we stumped as to what to do for even a few minutes as to how to use the composite apps.

Ruler Pro offers a simple ruler (limited by the length of your Android phone’s or Android tablet’s screen), as well as no fewer than three different protractors, a level guage and a distance meter. The ruler is simple: it places measurements along your phone’s screen and allows you to drag lines to the end points of whatever you are measuring. 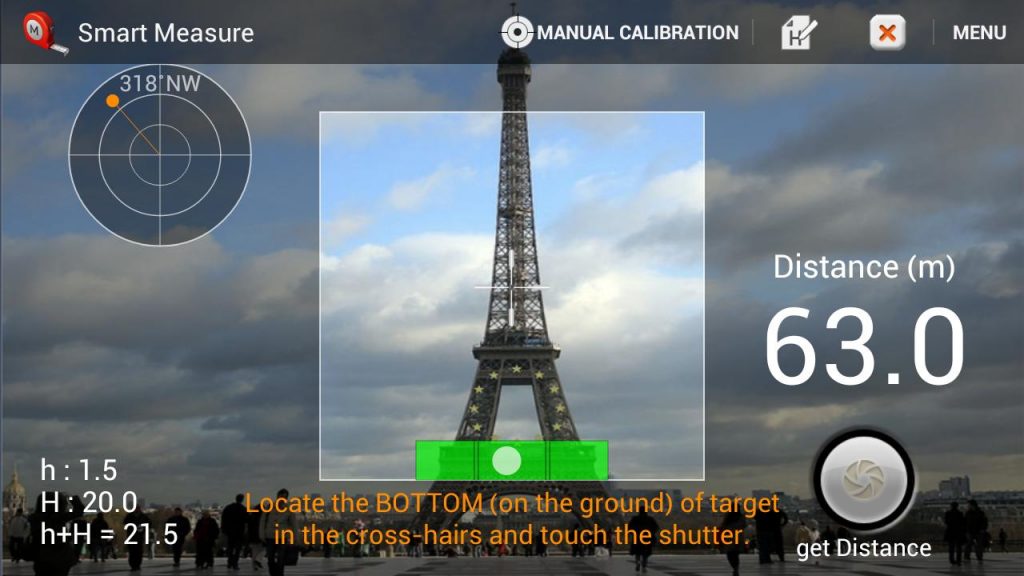 Smart Tools’ Ruler Pro’s three protractors differ in that one is simple a fixed guage (like the ruler app), one measure the angle at which your hold the phone, and the third allows you point the phone’s camera at the object you are measuring, in order to ascertain the angle of a fixed object.

The level guage is simplicity itself: place your phone or tablet screen-up on the surface you want to measure, and it will show you how far from flat it is. It might be a bit tricky to use your phone in this way when trying to measure the flatness of anything but a table surface, but if you are a joiner we assume you have your own spirit level. See also: Best Android Apps

Smart Measure Pro is marginally more complicated to use, but there’s a helpful contextual prompt featuring an Android using the tool. You hold the phone at head height, and point it at the foot of the object whose distance away you are trying to measure. You locate the bottom of the object, and use the onscreen level to make sure you are holding the phone straight.

Then the app measures the height and angle at which you are holding it. Click the shutter and you get a distance figure. We wouldn’t like to claim this is 100 percent accurate, but it was pretty close when we tried it and followed up with an actual tape measure, at least up to about 20ft. (Golfers are out of luck: the app can measure distance only up to 100ft. And using an app to measure is cheating, you hear?)

Smart Compass Pro is a mix of the straightforward and the, frankly, weird. The compass itself is simple: it shows you where North is. The Metal Detector, on the other hand, seems odd to me. It measures Magnetic Fields in your locale and uses this information to suggest when you are close to metal. In our – admittedly brief – tests we couldn’t really get it to do anything meaningful, to the extent that it’s possible we just weren’t getting its purpose.

Smart Light Pro offers too different flashlight effects, either lighting up the LED flash (if your phone has it) or simply packing your display with bright white pixels. As torch apps go, it’s pretty good, although the usual caveats about battery life apply.

The Sound Meter measures ambient noise, displaying the results in decibels  and via a helpful real-world guage that rises from ‘Rustling leaves, Ticking watch’ to ‘Jet engine at 100ft’. The Vibrometer measures, well, vibrations, and has a similar list, ranging from ‘Instrumental. Felt by animals’ up to ‘Cataclysmic. Total destruction’ (difficult to test that one).

We tested Smart Tools on the Motorola Motoluxe.

For £1.60 Smart Tools is an absolute steal, even if some of the apps are available for free. If you require any of its functions in a professional sense you are likely to have more accurate tools to hand, but that’s not really the point of Smart Tools. It’s a handy collection of occasionally useful tools, easy to use, and at a good price.