After reviewing a bunch of options for “offline” GPS use on my Android phone, I settled on NavDroyd, a paid, albeit powerful looking application that didn’t need to be online for anything.

Using just the built-in GPS and offline Open Street Map data that you download and update from their servers for free from within the app, you can do all the normal GPS functions like look for points of interest, get driving directions, have it read out turn by turn directions while showing you on the map, etc…

There wasn’t a good way to test how it would work in Italy, so I downloaded all the maps and data for Italy (under 100MB in their compressed form), played around, simulated drives, and got comfortable with the interface.

Upon landing in country, I had my phone in airplane mode with the radio off and only the GPS turned on. After finding a GPS signal, the app showed where we were and was able to sort of give us directions. It ended up being consistently easier to use street signs than the GPS, however for a few reasons, some of which might just relate to OSM’s coverage for Italy: 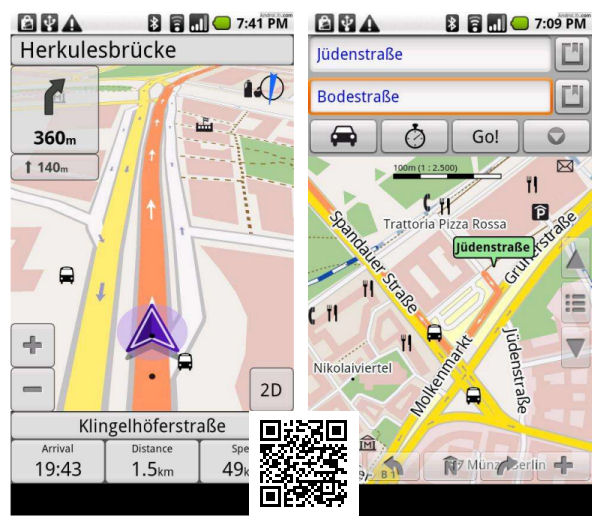 Points of Interest that you’d expect to be searchable aren’t, like airports and train stations for example. At first I figured this was due to lack of data, but then I was surprised when I zoomed in on the places when I found them and saw the names show up over the area. These was dynamic data from the POI database, and not an image, so I’m not sure why I could read what I was looking at on screen but not find the items when searching, even spelling letter for letter exactly like it was shown on screen. Bug, lack of data or user error?

Driving directions were typically horrible, even between major cities. The routing liked to take us on small country roads instead of the 3-4 lane wide highways, even though the highways were on the map and marked as such, including exits, ramps and all. At first I thought there might be an “avoid toll” or “shortest” option, but all I found was “fastest” vs “shortest” and either way, it often defaulted to small country roads. When I started to ignore the routing and just use highways, I noticed the the ETA would drop significantly once I “forced” it to use the better roads. This one I’ll consider a bug.

Rotaries of Death were quite fun. Italy loves rotaries (“roundabouts” to some of you) and was full of them which were a dream to use as it kept traffic flowing. That is, until NavDroyd would tell you to take a left into one. Now if this was consistent, I’d think there was an option for rotary direction, but the directions were random: one rotary would be clockwise, the other would be counter-clockwise. Thank goodness for common sense!

Entering addresses and cities was often buggy. For example, you’d have just the country and a city name already pre-loaded into the form from the last time you used it, and suddenly that city wasn’t valid, not in the list, not searchable, even if you deleted it from the form and re-typed it. Only solution was exiting the app and re-opening it. Bug.

Street data was okay at the macro level, but often lacking at the micro level, especially since so many cities have large pedestrian areas, tiny alleys, bridges, squares, etc… This is not the fault of NavDroyd, but rather an issue with data from OSM, which we can help to augment and improvefor future users.

In the end, we’d often use a physical map, but then turn the GPS on when we got closer so we could get some sort of bearing on where we wanted to go so it could correct us if I got way off course in the city. First, we’d find the point of interest on a physical printed map, then go and find it by browsing the digital map in NavDroyd, and lastly add it as a point of interest for later. My suggestion: add the points you want BEFORE you leave home so you have better online maps to quickly find what you’re looking for.

In the end, I’d give NavDroyd 3/5 stars. Better data may have made it slightly more usable, but the routing engine, entry forms and and POI search need to be fixed to get it up to 5 stars.