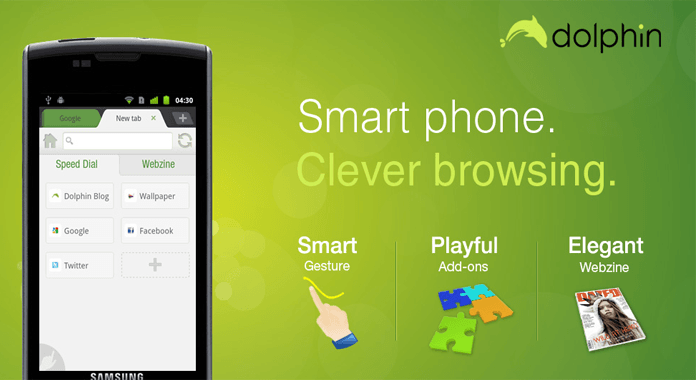 Dolphin was once the browser that gave Android pinch-to-zoom powers, and its original version still is. Its new “HD” release, however, adds a whole lot more: extensions, YouTube downloading, flick-based navigation, gesture launching, and more.

It’s unfortunate that Dolphin Browser HD is limited to devices running 2.0 and up, because the features it adds in would be welcome on any Android unit. There’s a smoother finger-pinch zoom, but also some new features that stand out. Tabbed browsing, bookmark access, and most other browser features are now tucked away, giving nearly the full screen over to content. When you need to get at your controls, you flick up, down, scroll tabs sideways, and use a few other gestures to access lesser-used items. You can also assign finger gestures to web sites—an “L” shape for Lifehacker, perhaps—and assign them to actions, as well. Most new and neat in Dolphin, though, is the ability to play YouTube videos on YouTube’s mobile page, as well as download videos to your SD card for later viewing when you come across them. There’s also better RSS handling and subscriptions, and a new add-on gallery that’s already sporting Read It Later, AdBlock Plus, and a few other Lifehacker favorites.