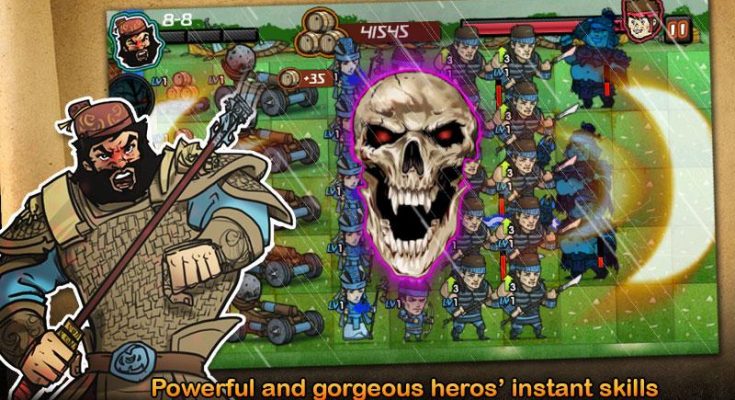 Excuse me a moment while I get a bit geeky for a second. After enjoying the TV series of Cowboy Bebop I was excited to check out the Director’s new work, Samurai Champloo. Just like the first show this anachronistic, hip hop inspired show just oozed with style, even though it wasn’t a culture I was particularly invested in. 3 Kingdoms TD by Joymaster shares a similar enthusiastic, over-the-top style that practically assaults you from the moment you jump in, but amongst the chaos is a challenging tower defense title with a few small twists.

Unfortunately the ‘twists’ aren’t exactly things that haven’t been seen before, but the combination of controlling a hero unit and multiple spells along with positioning and upgrading towers means you’re kept busy from round one. Tower positioning is locked along the preset paths, though their efficacy is relatively low and you’ll need to generate cash quickly by utilizing spells to either quickly kill or to boost the cash earned at every chance you get.

After completing a level you’ll earn Honor Points (HP) that can be traded in for upgrades for your hero, making it possible to tackle harder levels or to earn more HP in the endless modes. Unfortunately there’s only four levels to choose from and unless you’re completely new to the genre it’s not too hard to unlock all the available content early on. The prices for the HP items are ridiculous, which makes the ability to purchase HP with cash a bit of a gouge, but if you’re willing to farm out easier difficulties you’ll earn plenty of HP in a relatively short space of time anyway.

3 Kingdoms TD drips with a level of style that seems almost disproportionate to the simplicity of the gameplay itself, but if you’re going to keep things simple you may as well go hog-wild in some other way. While this is certainly a visual and aural feast to enjoy, if you’re tired of regular TD titles you may not find the depth or complexity you’re after in this game. 3 Kingdoms TD won’t keep you separated from more serious tower defense titles for long, but it’s amusing enough to remain entertaining for a while thanks to it’s amusing style and engaging gameplay.