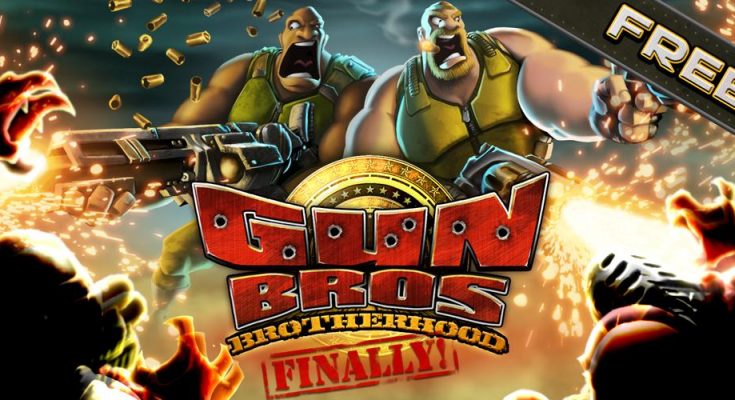 Glu Mobile, no longer content to charge a few bucks for a self-contained gaming experience, are moving into the freemium market at full speed. While we had some problems with their recent kid-friendly platformer Toyshop Adventures, we found their white-knuckle action shooter Gun Bros to be intensely fun, even if you never pay a dime for splashy extras.

The biggest issue any developer faces with a freemium game is deciding how much content to give away for free, and where to place the pay-gates. We’re very happy with the amount of free content you can find in Gun Bros– the initial download gives you fifty unique waves of enemies, with ten unlockable levels of difficulty, each giving you a higher amount of rewards.

As for the pay-gates, they are everywhere. Premium currency called War Bucks are currently only available as a paid download, and some items can cost more than $10 in real money. We really wish there was a way to earn War Bucks without paying money, either by referring friends, downloading other free apps, or unlocking gameplay achievements. Maybe in a future update War Bucks will be available for free, because we hate to see amazing weapons like the Shurkannon available only as a paid download.

But even if you never pay a dime, any action gamer would be overjoyed with Gun Bros on their device. The graphics feature fantastic animation and a variety of challenging enemies. Kamikaze soldiers who rush at you and explode, hulking tanks that have to be shot from behind, and heavily armored flamethrowers are just a few of the enemies you’ll face. While the fifty waves will repeat on harder difficulty levels, the level of challenge always feels fresh.

Plus, Gun Bros offers surprising depth for a freemium game. In addition to customizing your weapons and armor, you can also buy processing plants that let you earn more gold from Xplodium, which you receive after playing the game. Processing Xplodium lets you earn gold faster, but it’ll cost War Bucks to get a larger bonus. One advantage is that there’s no “rotting” if you forget to check in, something we never liked about games like We Rule.

Another unique aspect to Gun Bros is the online play, which is not live but can sometimes feel like it. You can pick any Gun Bros player from your Game Center buddy list and have them join you in a match. They’ll fight alongside you, often dying well before you do, but they revive after each wave. Their appearance and weapons are up to your buddies to customize, and choosing them for the fight will give each player a reward.

Gun Bros absolutely nails the intense and gratifying twin-stick shooter action, but we see some room for improvement down the line. Free players should be able to earn a few War Bucks somehow, and currently the game offers only one environment to run around in. Even though we loved blowing up barrels to clear the screen of bad guys, a change in scenery would be nice. Lastly, we hope to see live online multiplayer in a future update.

There’s no doubt that you should download Gun Bros if you love action games, since it has better gameplay than a lot of paid titles. If you avoid paying anything for the extra goodies, Gun Bros will stay free, but if you enjoy this game as much as we do, spending a buck for a virtual cowboy hat may not seem like a waste of money.