Within the ever-changing landscape of MMOs, the mobile MMO is a peculiar beast. Not too often will you find any perfect storm of MMO features in one mobile title, but as players, we’re instead forced to make do with a game that includes our favorite parts and pieces.

Book of Heroes is a mobile MMO that first launched for Apple devices in November of 2011 and on Android in March of 2012. The game’s developer, Venan Entertainment, has most recently produced Chapter 3: Dragonmoor, which puts the game even closer to what one might want from a “true” MMO. It’s not even close to being there quite yet, but if you like raiding and battling up the leaderboards with your friends, you might just enjoy this game.

Book of Heroes can be described in its simplest form as a trading-card-game-style, turn-based dungeon-crawler RPG. You start out as a lowly cook with nothing but a frying pan and greasy rags, and you work your way up to a mighty hero. Yes, I realize that’s in every RPG since creation, but it’s the journey that works so well in BoH. And that’s really what it’s all about. You’re not going to find state-of-the-art CGI, dynamic events, or even a character that acts as more than a paperdoll; BoH focuses on guild collaboration, an elaborate reward system, and some of the best story writing I’ve seen in an independent mobile game.

I found myself jumping into the game while on the hunt for a TCG mobile fantasy RPG. I wasn’t even looking for anything resembling an MMO, but the multiplayer features ended up being a nice bonus. As I progressed through the levels, I found myself enjoying the carrot-on-a-stick that often becomes a nuisance in modern MMOs.

I chose a rogue-like Shadow Walker as my first character and eventually made a War Mage for the variety. I found that the skills are balanced and vary enough to make combat strategic against NPC mobs, and the skill trees allow for builds based on your own playstyle. Questing in BoH is simple and straightforward, and I can’t stress enough just how much I enjoy the quality of writing in the quest dialogue. Even the direction of the game’s plot, taking you through various landscapes as you unlock new zones, is interesting and fun.

The general chat feature works in real time as in any desktop-based MMO, and I soon found myself intrigued by the player lingo. Guild recruiting messages, raid call-outs, and LFG requests made me forget that I was sitting on my couch holding a piece of Apple hardware. I’m usually slow to join a guild in any new game as I either already have one lined up with friends or am a bit afraid of making the dreaded wrong-guild decision, but BoH makes this an easy process. If you’re looking to try the group content, you simply watch general chat for someone advertising the start of a particular raid. Players will usually let you know the Might requirement (a measure of your character’s skill and equipment level) for the dungeon beforehand. Some guild leaders will set up their guilds to auto-accept anyone within a particular Might range so that joining a guild is easier. Once you join a guild, you can jump into the raid and work toward beating all the baddies before the time runs out. 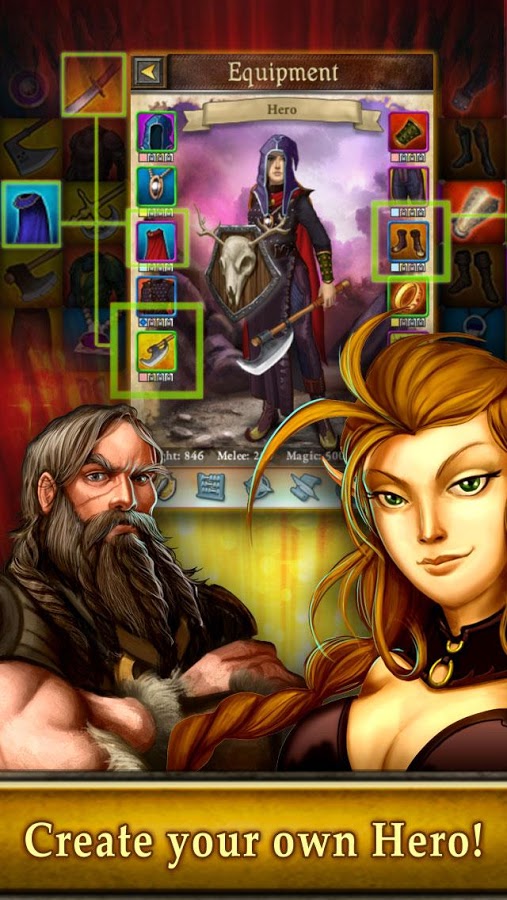 Most raids last around four hours, but you certainly don’t need to stay for the whole thing. You can jump in and out at any time, but your total kill contribution adds up for an ongoing leaderboard rank displayed for each raid. The top contributors win the best rewards, of course, but everyone who participates gets something, as long as the raid is beaten in time.

When raids aren’t going on, you can chat with your guildmates or join them for the smaller group content called Challenges. The guild leader or any guild officer can start a raid; most guilds have scheduled times for various raid levels.

So you can play BoH as a single-player game, you can treat it as a structured multiplayer game with dedication to one guild, or you can be a merc and hop from guild to guild, always looking for that next raid.

While I came away from BoH with that warm fuzzy feeling that only happens when a game doesn’t suck, I do have one big complaint. The game revolves around combat to progress, and the grind is almost unbearable at times. I made it to about level 16 before I realized that I wasn’t making nearly enough silver in normal questing to pay for my next tier level of equipment, so I had to either grind more of the same mobs or throw down some cash in the item store. Being the cheapskate that I am, I chose to grind. Mind you, it’s not late-’90s-level MMO grind, but it’s still there. That said, I’m now closing in on level 20 (the game has a level 30 cap) and haven’t spent a dime. That’s a win in my book.

Overall, though, I really enjoy BoH. I usually join a raid or two before I hit the hay at night, and the game really caters to that playstyle. But if you’re looking to be more of a hardcore player, that’s also an option.

Book of Heroes is currently available as a free download on mobile devices from the Apple Store or for Android on Google Play.