Real PC and console games on mobile devices are a kind of holy grail of gaming. And, like the grail, they are probably just fantasy and will never truly materialize. For now, we have to be happy with pretty versions of our favorites that offer abbreviated feature sets and gameplay ported over from their PC and console counterparts. This is what The Sims 3 offers in spades.

Game play: For players who have experienced any of The Sims games from Electronic Arts, The Sims 3 for your Android device will feel quite familiar. With point-and-click simplicity players design their Sims, dress them, place them in a house, and guide them around the world. Unlike some Sims titles in the past, The Sims 3 features goals and objectives for Sims to pursue, and these define the game’s plot. Rather than simply screwing around with no real direction, as previous installations may have driven players to do, The Sims 3 uses these goals to drive players out of the house, into the city, and into interactions with other Sims. A Sim may suddenly decide he wants a girlfriend, encouraging the player to seek out a relationship with another Sim.

Most of the features of traditional Sim games are here, but in abbreviated form. For example, rather than having a dozen televisions to drop into a Sims’ house, players only have a couple. Of course, this is to be expected, and it actually contributes to the game’s portability. Rather than haggling with oneself over which LCD to plop into the Sims’ game room, players can simply pick the small, medium, or large option and get on with their business.

On two occasions during play, the game did freeze up. But these two encounters were back-to-back, and coincided with large data drains on the phone. No similar problem was experienced before or since. 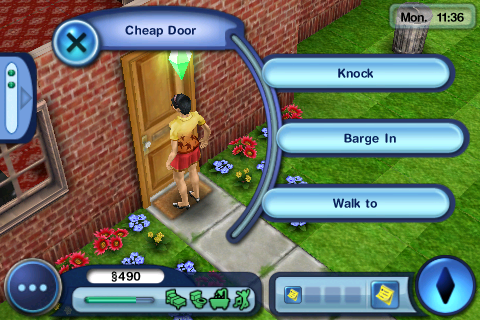 Graphics: The Sims 3 was released packaged on T-Mobile’s Samsung “Vibrant” (their brand for the Samsung Galaxy S line). And on the Super AMOLED screen of the Vibrant, the game looks fantastic. Zooming in and out, The Sims 3 maintains its graphical integrity. And the built-in camera spin helps even further to navigate. Animations are clean and did not seem to cause any problems during play. Interactions with other Sims are animated well. And the world map is clean and crisp. It is by far one of the best looking Android games currently offered.

The game’s graphical quality is not doubt a drain on the battery. So battery life does need to be considered for long playthroughs. Playing for almost three hours straight during a flight and airport layover nearly sapped an almost full battery on the Vibrant completely.

Sound: Sims veterans will no doubt be very familiar with the sounds of The Sims 3. Ambient noise is decent. And the most identifiable audible trait of The Sims—that unique Sims language—is packed right in as well, making character interaction as interesting as ever.

Controls: As with most mobile games, simpler is better in The Sims 3. The two camera controls are directly available from the game’s HUD. Zooming is facilitated by a slider on the right side, and players can switch to the camera spin by clicking a button then swiping the screen. Selecting items is effective and, more importantly, accurate. Menu navigation is also a breeze. Everything feels easily accessible and works well.

One problem that persists is literally catching other Sims to interact with. While in the neighborhood map, players will see other Sims (denoted by bland yellowish stick figures) moving about, and they will be encouraged to interact with them. Unfortunately, the other Sims move extremely fast. It may take several tries to click on and access one of these runaway Sims until one gets the hang of it.