Another bunch of former AAA game developers has got together to form a mobile games studio and try its luck in the App Store and the Android Market.

SupaSupa Games is made up of THQ Digital Studio Phoenix ex-staffers, all of whom worked on the popular MX vs. ATV motocross series.

So it’s not entirely surprising that this new studio’s first release is a motocross game. SupaSupaCross takes on the action from a sort of top-down viewpoint, with you pounding the dirt against other racers around a variety of tracks.

The realism of MX vs. ATV isn’t on show, however, as SupaSupaCross focuses on a more casual, arcade experience – and for the most part it pulls it off well.

Each track involves simply sticking to the track, utilising the various boosts, dodging mud patches, and making sure the competition is far behind you.

Think Reckless Racing on motorbikes and you’re in the right area. You can control your biker either with tilt controls or with simple left/right touch controls, and both methods work well.

The action is nippy and well-presented, and we found ourselves really getting into it and yearning for those coveted gold medals.

There’s an element of skill involved, as touching the edges of a track will cause your racer to fly all over the place, and lose you valuable seconds. Sticking between the lines for an entire race feels rather rewarding.

Other little bits and pieces go to enhance the experience, such as the ability to tap on the screen at the moment the word ‘Go!’ appears to gain a huge speed boost and zoom away from your competitors. 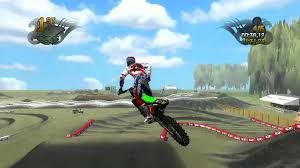 While SupaSupaCross is good fun, it also has numerous niggles that are impossible to ignore.

You like achievements in games, right? Well SupaSupaCross may well be the game that puts you off them, as it throws achievements at you every five seconds or so.

SupaSupaCross is incredibly easy, to the point that you can do nothing and still not come last in a race – your biker will instead bend around the track by himself, hitting walls every now and again that will fire him off on his way.

And the game suffers from a lack of content. There’s one game mode, and although it looks like there are plenty of levels to play through the game actually keeps repeating the same tracks over and over to give the illusion that you’re playing new content constantly.

SupaSupaCross is a good start from a motocross enthusiast developer. Hopefully we’ll see a sequel that deals with all these issues that keep it from greatness.
Source:  pocketgamer.co.uk