Real Racing 2 has competition on its hands. That’s the most striking thing to come to mind when looking at Race of Champions. It’s a bit of admitted hyperbole, as there’s plenty of room for two excellent racing games on the App Store, but it’s an easy way to explain that Race of Champions is rather good.

Based upon the real life event of the same name, Race of Champions is a racing event covering multiple disciplines. Rather than just testing drivers in the same car type, they’re pitted against each other in numerous different vehicles in a head to head battle for victory. It’s an ideal premise for a racing game and one I’m surprised hasn’t been implemented in a more mainstream way before this.

It’s immediately obvious how visually appealing Race of Champions is. While the crowds may seem a little flat, the cars themselves are pretty gloriously designed with each vehicle looking just how the real thing should look. Currently, there are five cars to use depending on the stage: the KTM X-Bow, popular family car VW Scirocco, RX-150, Solution F Prototype and ROC Car. It’s a varied bunch and a suitable selection to demonstrate just what the competition can offer. It is a little limited given the price and what Real Racing 2 offers but updates are promised with new cars to follow. Each vehicle feels sufficiently different to the last with the handling and physics behind them feeling appropriate. 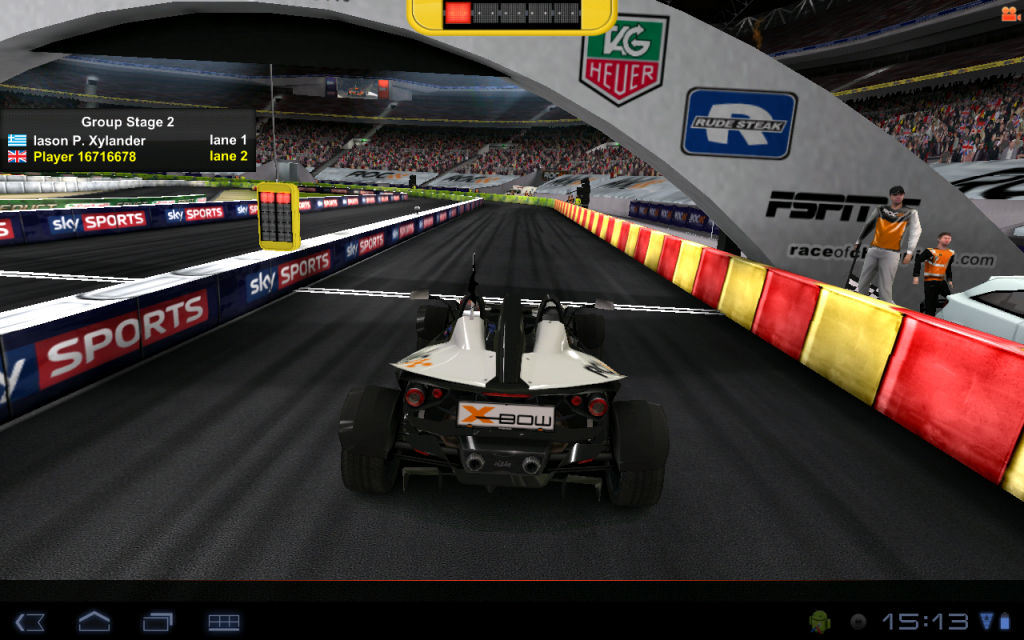 Offering three different game modes, Race of Champions provides sufficient variety for the price. There’s a Duel Mode enabling players to challenge other real gamers in the online rankings as well as a Time Challenge mode, pitting racers against a ghost car in order to beat the best lap time. The real meat comes in the form of the Championship Mode with four different scenarios and four Championships at the ROC tracks in London, Paris, Dusseldorf and Gran Canaria.

It’s an entertaining and challenging selection, too. Unlike other racing games, this one takes some practice to truly become any good at. Fortunately, the choice of three control methods means that input isn’t a problem. Tilt based controls are the default selection but I found the tap control method, involving tapping to the left or right of the screen to steer, worked best for me. A virtual steering wheel method is also available.

I’d like to see more cars available in Race of Champions but as it stands, it’s a solid racing effort. With such a responsive handling engine and attractive visuals, Race of Champions is a great choice for racing fans looking for something a little different from the usual events.