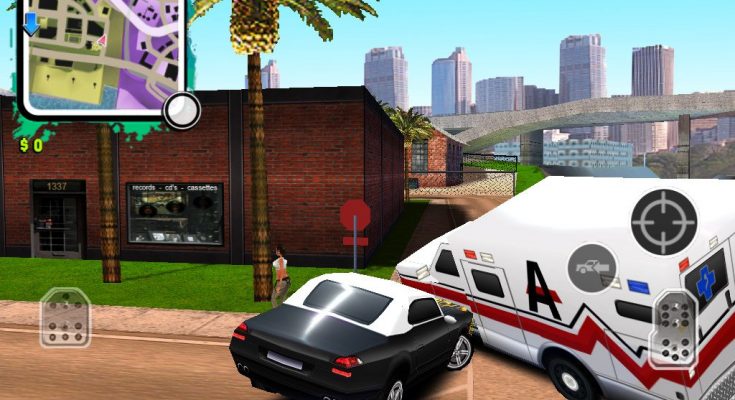 If you want to get in on the hustle, particularly a West Coast hustle, you’ll want to head to the App Store and pick up Gameloft’s latest crime epic, Gangstar. If you’ve ever enjoyed the Grand Theft Auto series, you’ll probably enjoy Gangstar, which is one of the most technically impressive games on iDevices.

It doesn’t matter which device you have, from the first-generation iPod Touch to the iPhone 3GS, Gangstar runs smoothly and never loads aside from a lengthy initial boot-up–not unlike the Grand Theft Auto games.

In fact, if you’ve ever played those games, you’ll know exactly what to expect from Gangstar. It does a stellar job of imitating the GTA games, from the mission structure to the type of humor–though it perhaps isn’t quite as funny as the original GTA games.

The game’s primary gameplay is in its story missions, and it has a lot of them. The missions are along the lines of what you might expect from GTA and games like it–following targets without getting too close, killing thugs who messed with the wrong people, and dropping off “working girls.”

Over the course of the story you’ll meet lots of different characters, starting with Mexican gangbangers and gradually expanding to include mafiosi, yakuza, and politicians. The story is nicely done, but it isn’t anything groundbreaking. Most of the time you’ll have only one option for the next mission, though at one point you’ll be able to work concurrently for warring gangs, making the progression a bit less linear.

Most of the missions can be completed in five to 10 minutes, making them well suited to short bursts of play. The menu screen is especially convenient, because it lets you launch any mission without having to drive all the way to the marker, saving you lots of tedious driving time. You can also buy health, guns, and police bribes right from the in-game menu. This makes an already easy game even easier but keeps it from being frustrating.

The story missions will give you at least five or six solid hours of play, and after that, it’s fun to just drive off of jumps and over pedestrians around town. Aside from that, there are a few race missions to complete, and you can drop off food and passengers in the taxi, ambulance, and delivery-vehicle missions. There are also achievements to unlock. 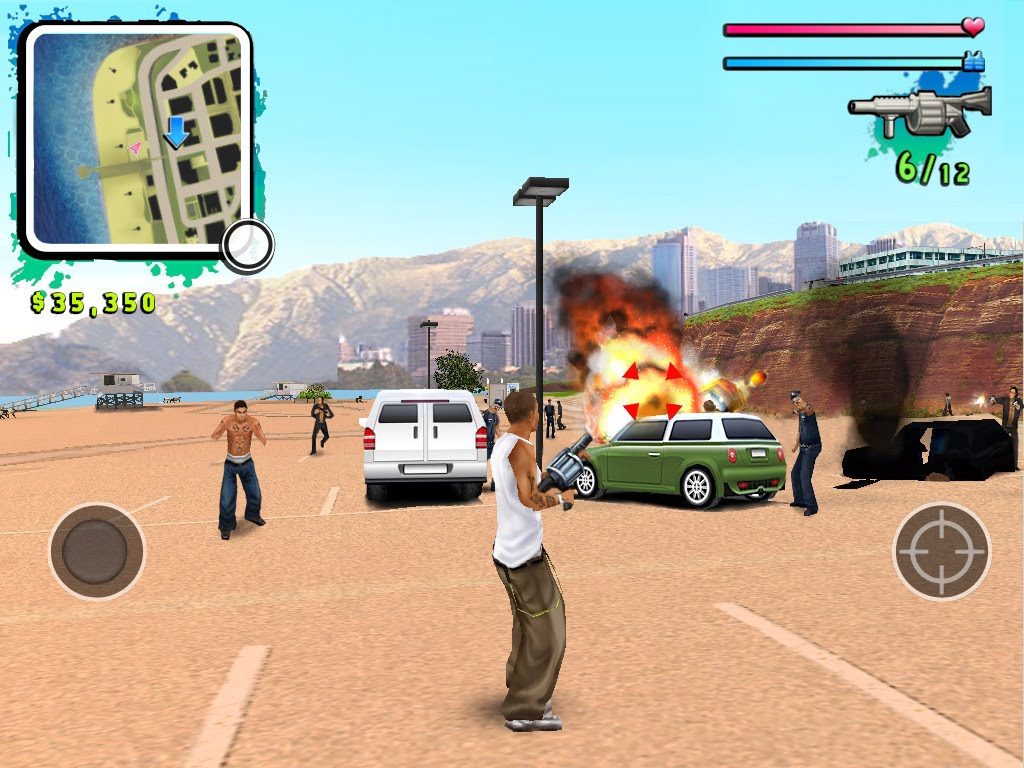 Unfortunately, messing with the police isn’t as fun as it is in the GTA games. Like in those games, committing various infractions will increase your “wanted” status from level one on up to level five, but the police don’t change their tactics at all. You won’t be running into SWAT teams, FBI, or the Army. A higher wanted level just takes longer to go down, and the cops are pretty easily defeated with any decent weaponry.

The game takes place in Los Angeles, and while we couldn’t identify any landmarks, the city itself is big enough, and the layout is conducive to driving at high speeds. It helps that small obstacles like trees and light posts can be passed through freely without slowing you down or stopping you. Driving controls default to the accelerometer, but virtual steering wheel and joystick options are present, and virtual joystick seems like the best control option.

You’ll use a virtual joystick for moving on foot as well, and swiping a finger across the screen will pan the camera. To target an enemy or vehicle, you just need to tap it to lock on. Overall, successfully gunning down your targets is remarkably easy, and most enemies go down before they can do much damage to you. There are no sprint or jump buttons, but the game controls well, and stealing cars is easy.

Gangstar’s presentation is a definite strong point. The game has very little voice acting, but the character illustrations are well done, as are the menus. There are also about six radio stations for your listening pleasure, complete with radio banter and ridiculous commercials. The humor is a bit hit-and-miss, but if you don’t find a station you like, you can make your own with a custom playlist, which is an especially nice touch.

Graphically, the character models look pretty standard for a modern iPhone game, but the cityscape textures are surprisingly detailed up close. Unfortunately, anything more than 75 feet away devolves into a blurry mess, but at least you can see where you’re going, and the frame rate remains rock solid throughout.

Overall, Gangstar is an amazing accomplishment on iDevices. It’s a blast to play, taking all the best parts of the GTA games and condensing them into a completely workable portable experience.
Source : gamespot.com