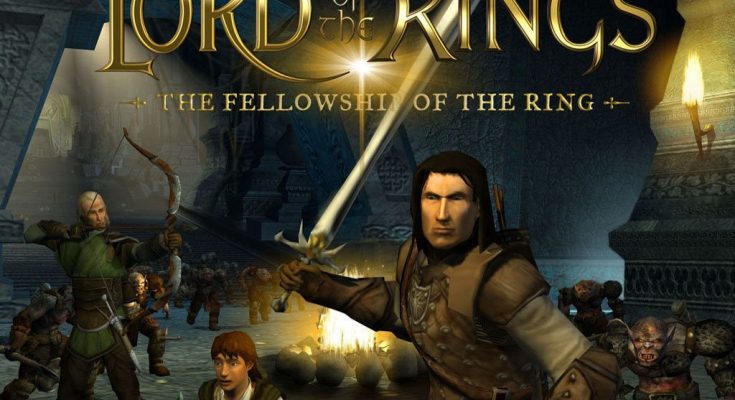 The Lord of the Rings: Middle-Earth Defense Review

Surprisingly, a search of the App Store won’t reveal much in the way of Tolkien’s epic high-fantasy trilogy. We’ve seen many other movie adaptations converted to games, but nothing in the way of the Fellowship’s desperate plight to Mt Doom. It’s strange then that Glu Mobile has championed the well known licence on the App Store, and has done so in the form of a tower defense game, The Lord of the Rings: Middle-earth Defense .

Thankfully, Lord of the Rings: Middle-earth Defense isn’t your typical tower-defense clone. Obviously, this is largely due the vast source material it draws from, using the entire Lord of the Rings adventure as a tapestry to bind each of its 18 levels together. You’ll encounter goblins in the Mines of Moria, fight with the Rohirrim in the Battle of Helms deep and fend off Nazgûl a-plenty on your way to defeat Sauron. There are 7 iconic battle locations all up and a host of familiar enemies to mow through.

As far as the gameplay is concerned, what really sets apart Lord of the Rings: Middle-earth Defense is the way it uses the heroes of the fellowship as your typical TD towers. Maps in Middle-earth Defense aren’t comprised of static paths bordered with designated areas where you place your towers. Instead, in much the same way as Fieldrunners handles TD, the path the enemies take can and must be manipulated by you to succeed. To do so, you’ll be able to build a variety of different barricades with wood earned after each wave. Barricades each have different abilities, such as slowing or damaging creeps that pass by them. Though you are limited where you can build, it is up to you to decide what paths to open or close.

Once your path is determined, you must then place your heroes. Ranged heroes operate much like your typical towers, attacking from static positions. Melee heroes however, roam around their area picking fights, and so can get up close and personal with a creep wave hitting them constantly as they pass. Heroes can be upgraded with earned gold, improving their attack power, speed, range or skills. The latter is unique to Middle-earth Defense, as each warrior Hero (there are support heroes too, such as the hobbits) has a skill that can be periodically activated to dramatic effect. Effective use of skills such as Gandalf’s meteor shower or Gimli’s axe tornado are pretty much essential for getting past the harder levels, as the game does get quite difficult at times. 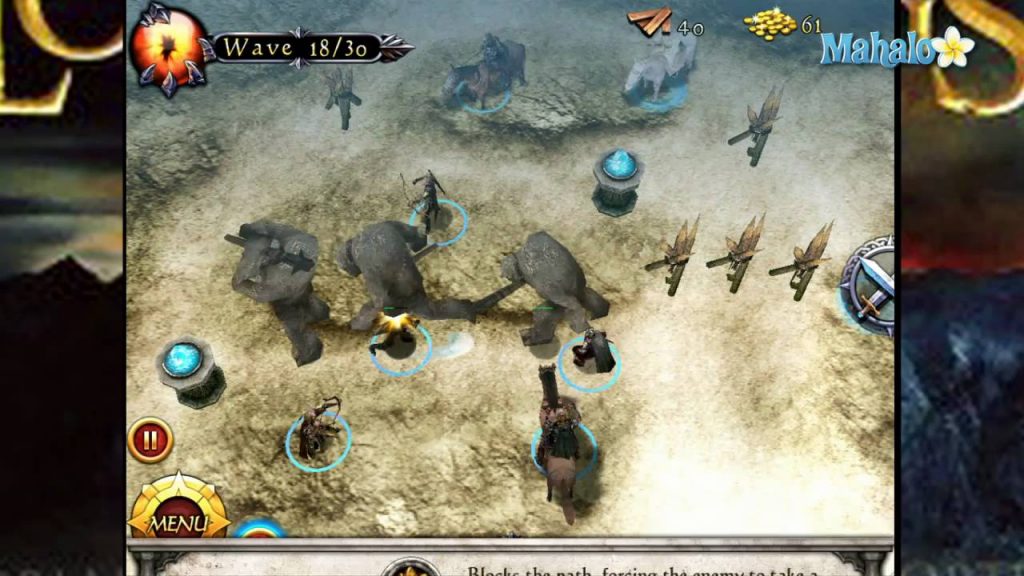 The individual creeps and heroes in Middle-earth Defense are a mixed bag– some look terrific, whilst others are barely recognizable. This can be attributed to the somewhat jaggy models and darker textures experienced on the 3GS device we tested the game on, though we’re thrilled (and surprised!) to see that a Retina patch has already been released which sharpens things up significantly. Unfortunately, this doesn’t remedy the fact that animations are only just serviceable, and that heroes are sometimes indistinguisable and easily lost amidst the chaos.

Glu Mobile have otherwise done a great job of maintaining the standards of the license. The musical score is not overstated, and is actually worth listening to as you’re battling wave after wave. Short cutscenes describing each scene and text dialogue between characters abridging each level are well written and give context to your encounters. There is also a Challenge Mode which is unlocked after completing the tutorial that allows you to attempt each of the Story Mode environments with unlimited enemy waves, in an attempt to post your best Game Center or Facebook score.
Finally, there are a host of trophies (achievements) to earn in Story Mode that unlock additional characters and environments in Challenge Mode. We’re happy to see that Glu Mobile haven’t skimped on content, as there’s a heap to do here; and with 3 difficulty levels you can honestly expect several hours worth of gameplay all considered. Certainly don’t expect to breeze through your journey to the Black Gates.

Lord of the Rings: Middle-earth Defense is an interesting take on the saga for its first journey to the small screen. Though an unusual use of the licence, it is not an unwelcome one, as Middle-earth Defense does enough different to make it stand out from the very crowded tower defense market, not the least of which is provide great context for your battles and an interesting and well-known story to keep you engaged. There is one minor setback though– while we don’t usually comment on price, it is obvious that use of the Lord of the Rings licence does bring with it a slightly elevated hit to your hip pocket. If that doesn’t phase you, we can certainly recommend Lord of the Rings: Middle-earth Defense as a challenging and entertaining TD clone that should pose a pleasant surprise to cult fans and fans of the genre alike.