When a gaming genre has been truly pushed to its limits, and every possible angle has seemingly been explored, there are usually only two directions to head in – either follow the crowd and create a game that inevitably gets lost in a sea of releases, or aim to please the hardcore following and become known as the game for real followers of that particularly genre.

Myth Defense: Light Forces is definitely Smartpix Games’ attempt at taking that latter road, with tricky hardcore tower defense action from start to finish. While the game will definitely please fans of the genre, more casual players may feel overwhelmed by the lengthy levels and the overall lack of explanation. 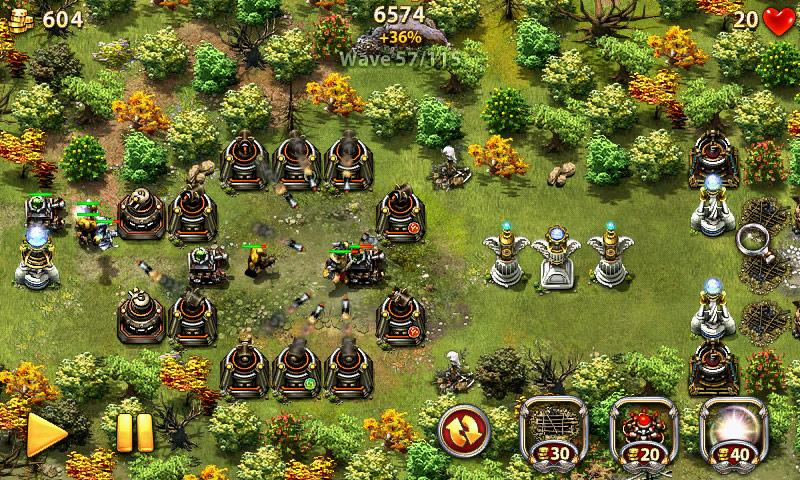 Over a series of 70+ waves, enemies come pounding out of the gates on one side of the level with the intent of reaching your town on the other side. You are tasked with purchasing and placing down towers in their paths that act as both a means of attack, and a means of forcing the baddies in whichever direction you see fit.

As you kill enemies, they drop money which can be used to buy more towers and upgrade your existing ones. Each wave is more difficult that the last, and by the time you reach the final hurrah, you’ll most likely have a battlefield full of towers that leads a twisted, winding path for your foes.

So far, so similar to every tower defense game that exists right now. However, Myth Defense aims to please the hardcore TD players out there by being incredibly difficult. First off, rounds are long and drawn-out affairs, with at least 70 waves in each campaign mission that last around 30 seconds each on average. This means that you’ll need a good half an hour of spare time set out in front of you each time you play if you want to fully appreciate what Myth Defense has to offer.

This approach is quite the double-edged sword. On the one hand, when you get to around wave 60, the action becomes incredibly tense, as you pray that the towers you’ve placed down are going to be enough to keep back the hordes. Losing at this point would be soul-crushing, and it’s wonderfully edge-of-seat gaming.

Yet at the same time, it also means that the thought of starting a new game is quite overwhelming, as you know you’ve got a huge game ahead of you which could potentially go horribly wrong. It would have been nice if the game had offered a mode in which you can lower the number of waves below 70, but there are only options to raise this number – you can in fact raise it into the hundreds.

The game is brimming with these double-edged sword situations. There is no sign of a tutorial at all, and you’re flung straight into the action at the deep end with lots of different elements to explore and understand.

This definitely gives the game a lot of mystery and will please hardcore TD gamers as they explore what all the different towers and traps do, while also experimenting with the alchemy and shop elements of the game. However, once again more casual players are left in the dark, and all the different areas of the game will feel like far too much to take in at once.

Ultimately, however, Myth Defense offers one of the better TD experiences on the Android with some wonderfully deep gameplay. Elements of each environment, such as lakes and swamps, force enemies down specific routes and can hinder or help their progress. Depending on the difficulty setting, enemies can also be more clever about the route they take, opting to walk a longer distance to their destination if they know that the shortest route is brimming with your deadly towers.

Myth Defense also offers lovely visuals that are among the best since on Android to date. It’s very well presented and there is no noticeable slowdown, even when the screen is bursting with towers, fireballs, arrows and goblins.

Top it all off with spendable glory points and gems and a battle mode for a more customizable experience, and Myth Defense: Light Forces is a great tower defence title that will hit a home run with fans of the genre, but leave more casual players rather dazed and confused.