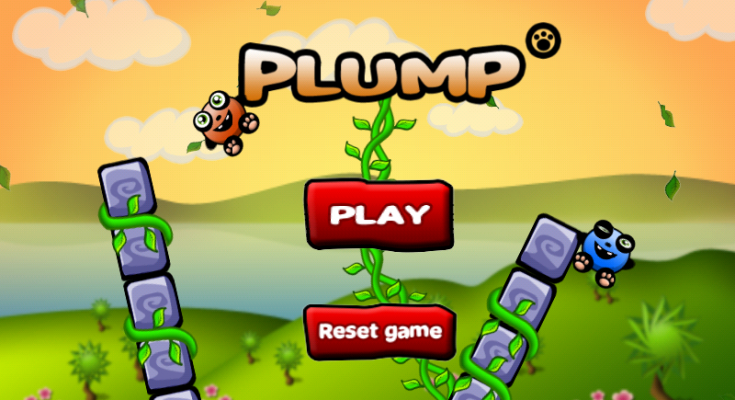 Plump is a tubby little creature that loves chocolate and you’re going to help him gobble it all up in a new game called Plump from developer Cristiano Bartel. The game has all the ingredients that make a good game like great graphics, power-ups and plenty of levels. The control scheme can be bit tricky to figure out at first, mainly because it’s simple but unique. More than once it had my brain going one way, and my finger going the opposite direction.

Okay, to control little Plump you’re going to touch the little tube he’s in to launch him, then use a finger to rotate the maze while gravity simply takes care of the rest. That may not have been the best description of the control scheme, but you’ll see what I mean when you start the first level. Plump will basically fall through the levels while you’re tilting the maze. It starts out fairly simple, but then you’ll start seeing spikes, spinning platforms and other objects in your way. The little moving spiky guys are by far the worst thing I’ve encountered as it’s easy to try and fall fast through a level, and not see when one’s ahead.

There are 3 themed worlds and 40 levels to fall through in Plump. The first world has 16 levels, the second Christmas/Winter themed world has 16 as well, and the 3rd Candy land world has 8 levels. You get a score based on how fast you go, and how much candy you eat which in turn decides how many stars you receive per level. There aren’t any features to speak of besides the power-ups which have actually been pretty sparse so far. The “Spike Suit’ power-up was pretty cool though and allows you to break through barriers and not take on any damage.

Plump has great looking colorful graphics, and I really like the whole “rotating maze” part of it once I got used to it. I’ve noticed quite a few market comments saying that the game has force close issues, but it runs perfectly on my Samsung Captivate (Galaxy S). Overall, it’s a pretty fun game, but I did think it was a bit too easy as there aren’t really any goals to meet to get to the next level. If you can make it from one pipe to the other you can advance, but you still have the “3-star” levels to shoot for. Plump is a game that’s definitely worth a look and you can check it out free in the Android market.