Cross Court Tennis is a sturdy tennis app for your Android smartphone or tablet. However it does cost £1.29 and for that price you expect a lot more; as there is nothing particularly unique about this app. See also Top ten Android apps.

The app offers you two game modes; instant play or career. Instantly play is exactly as it sounds, you just select your difficulty setting – either beginner, intermediate or advance – and boom, you’re on the court and are serving first in a four game match…you really should win it from there! See Stick Cricket for Android review.

Career mode is a little more in depth and is quite engaging. You can’t edit your player’s appearance or anything PlayStation-y like that, but you can train different aspects of your player’s game to suit your style.

After a light session of drills in training you’re ready to start your career proper and are immediately entered into the U.S. Futures 1 tournament (romantic name or what?). This is where the wheels completely fell off for me. I had the pre-tournament butterflies in my stomach, eager to succeed and progress my career as a rising star in tennis and i could barely contain my excitment; then I made the fatal mistake of actually playing the game and it all went wrong. 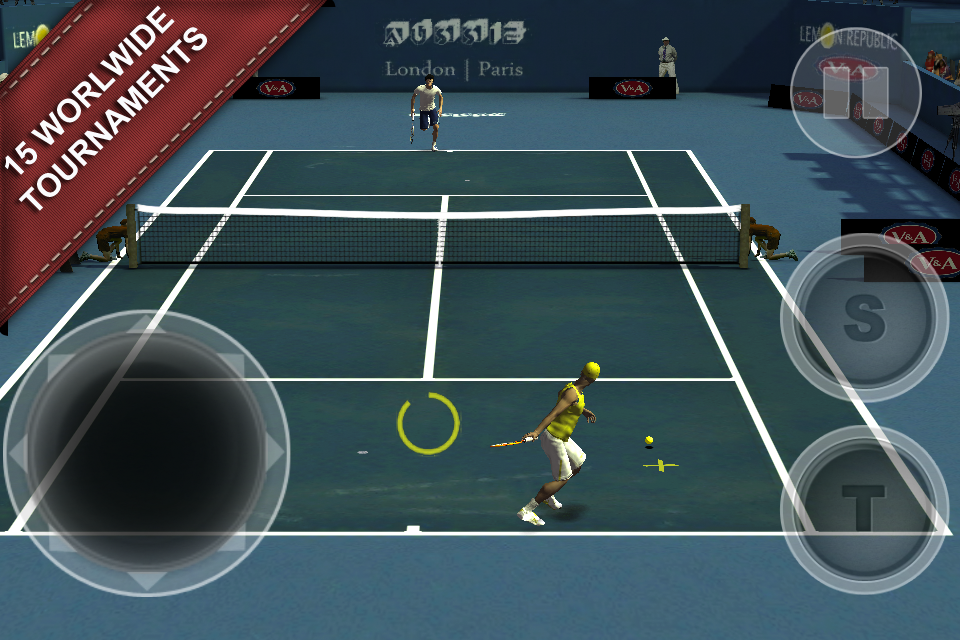 There’s a very major problem with Cross Court Tennis and it’s the gameplay – it’s awful. It’s not that hitting the ball is difficult or the opponent it too good, but actually winning a point is a war of attrition. I’m no video game virgin (bit of a sports game veteran, in fact) but it took me over half an hour to complete and win my first match in the app. My second and third matches were not much of an improvement either.

Hitting winners in this game is just a bit impossible. Which is a real shame, because everything else in the game is there. The auto-run is good, graphics are excellent, sound effects, controls, layout. Everything. But the gameplay is terrible and for an app that is a game, it’s a bit of an issue.

Maybe we got on of a bad batch on our Samsung Galaxy Tab 10.1, or maybe I have lost my video game touch (if I have, then I apologise), but if you’re going to pay for an app then you expect it to be good and this app simply isn’t. A real shame.

Cross Court Tennis is a pretty convincing tennis game from your Android device. The graphics and game play are super-smooth and career mode keeps you interested in the game for more than just five minutes. The problem is that winning a single point can take unto five minutes and this completely ruins the game.