The PokerStars mobile application is available wherever PokerStars.com is offered for almost every smartphone and tablet, including iPhones and iPads. The free application is very quick to download and install. Without much effort, you can be up and running quickly.

PokerStars Mobile features include:
-Easy-to-use lobby to find the game you are looking for
-Ability to play all available tournaments, sit and gos, cash games, and Zoom Poker against the same shared player pool of PokerStars.com
-Smooth play if you have a decent WiFi or mobile connection
-Easy to switch tables while multi-tabling
– Find a friend playing while you are on the move via the player search feature
-RSA security token works on your mobile device 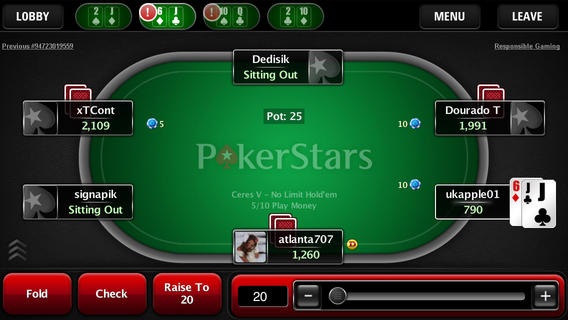 There are some limitations playing on PokerStars instead of on your computer. These include:
-Can only play on four tables on most devices and five tables with an iPad. Serious multi-tablers will only want to use PokerStars Mobile while on the road. For casual players, four to five tables are plenty.
-No access to your cashier to deposit or withdraw funds. With an Android device, PokerStars has a limited web cashier that allows the depositing of funds only.
-PokerStars Mobile will disconnect you from your mobile client if you take a phone call while playing. For those playing at home, you might want to think twice about playing on your smartphone instead of your computer if you plan to answer calls while playing.
-No ability to change your account information or security settings. If you plan not to use your RSA token when traveling with your mobile device, you should disconnect this setting via your computer before you hit the road.
-No third-party software such as HUDs work on your mobile device. Since most players use this software to help with playing a plethora of tables, this isn’t the end of the world, but many players will avoid opening up a few tables without their prior statistics on players being displayed.
-Other options are not available such as resetting your bet slider amounts, sharing hands via the Boom Replayer, always declining heads-up sit and go rematch requests, and the absence of Home Games.
Despite the few features that are not available on PokerStars Mobile, the site did an excellent job of capturing all of the critical features of PokerStars on your computer.

For poker players constantly on the go, PokerStars Mobile gives you the look and feel that you are playing the site you know and love to allow you to enjoy poker while on the move.
Source : pocketfives.com