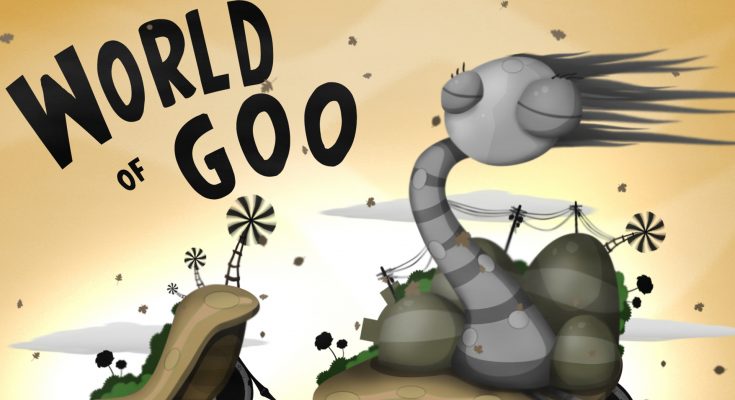 We tried the free demo of World of Goo, which offers only the first chapter; the full version costs £2.99. There’s enough in the free version to warrant the 27MB download, although a Wi-Fi connection is recommended. See also: Best Android Apps.

Each chapter has several levels, and the aim in each is the same. You start with a small structure filled with goo balls, and somewhere else onscreen is an open pipe. Your challenge is to drag-and-drop goo balls to extend your structure to meet this pipe. Any goo balls not used as joints in said structure are sucked up the pipe and collected in a jar.

The difficulty comes in making a self-supporting structure, which won’t bow to the demands of gravity, without using up too many goo balls. You’re told at the bottom of the screen how many must be collected in order to complete the level, while OCD mode (that’s Obsessive Completion Distinction) requires many more.

Some levels contain balloons that can help to raise your structure or remove obstructions, while different types of goo balls offer characteristics that may prove essential to your quest. The green goo balls can be added to a structure and later broken free for collection in the jar or use elsewhere, for example. Just make sure they don’t form a supporting joint, or the whole thing will collapse. See all games reviews.

A Sign Painter can make himself something of a nuisance, popping up at times rather silly messages onscreen, but keep reading: some of his tips will be very useful in helping you on your way.

Each challenge is different enough from the preceding one to keep gameplay interesting. We particularly enjoyed the Tumbler level, in which every few seconds the ground would move and our goo structure would tip over; but were hopelessly stuck on Fisty’s Bog, where spikes looming above and below threatened both the balloons lifting our structure and the goo balls themselves. Fortunately, you can skip a level and move on to the next. Read more phone games reviews.

But it’s not just the problem-solving logic required that makes World of Goo brilliant; the game’s 2D graphics are fantastic. High in resolution, colour and detail, the World of Goo is far more beautiful than its name would suggest.

Plenty of users have complained about the lack of an in-game mute button. Since we tend to play games with our Sony Ericsson Xperia Arc’s multimedia volume set right down low, we didn’t find this an irritation.

However, we found the phone’s display slightly too narrow to view everything onscreen at once in landscape mode, and would have appreciated a proper pinch-to-zoom function a la Angry Birds. It’s exactly the same complaint we had with Greedy Spiders, but World of Goo doesn’t suffer from that puzzle game’s annoying banner ads.

The graphics alone are almost enough to make us want to download the full version of World of Goo; more importantly, the gameplay kept us entertained. If World of Goo proves one thing, it’s that some challenges are never as easy as they look. Check out the Demo version before splashing out £2.99 on the full game.