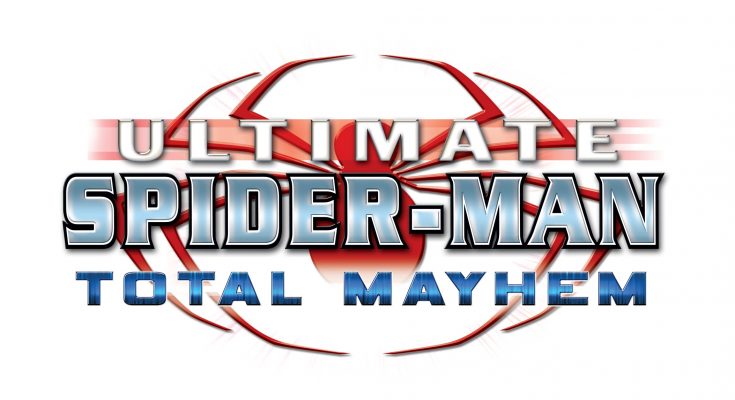 They don’t call this Ultimate Spider-Man for nothing. Not only is Gameloft’s new game based on that specific narrative of the Spider-Man universe but is also, quite simply, the ultimate iPhone superhero game… thus far. It does a superb job making you feel like you are riding shotgun with Peter Parker, able to break out some of his best moves to bring down a gallery of familiar foes, such as Sandman and Doc Ock.

The fact that it is one of the most handsome iPhone games yet is, well, just gravy.

Whereas Hero of Sparta II stumbled with fidgety controls and an unfriendly camera, Spider-Man suffers from neither malaise. Instead, Spider-Man’s slick, accessible combat system is a breeze not only to learn but to use in the middle of heated struggles with arch-villains and street thugs alike. There are three action buttons: strike, web, and jump. You can use the strike button all by itself just to dish out a few hard punches in rapid succession, but to truly overrun the criminal element, you must make use of the nearly 20 combo moves.

Snare an incoming thug with webbing and fling him through the air, smashing him against the ground for teeth-shattering punishment. Pepper his face with swift punches and then flip over him to deal a back-breaking blow. My favorite by far is grabbing an enemy with webbing and then pulling Spidey’s feet right into his chest. It’s playful brutality. 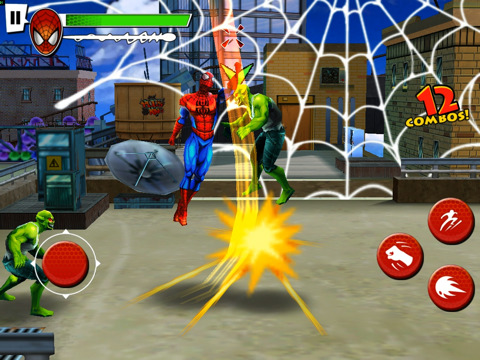 You must also use spider sense to dodge incoming attacks. Sometimes, when Spider-Man is about to be thwacked, an exclamation point flashes along the bottom of the screen. Tap it to perform a slo-mo evasive maneuver that often sets you up for a counterattack. There is a definite drawback here, though. Evasion eats away at a special meter that grows when you’re slamming thugs. When that meter is full, Spider-Man unleashes an area attack that pushes back packs of enemies – and it’s great against rampaging bosses. Balancing the use of evasion with reliance on the big special attack to get out of jams is a critical thread that runs through the entire game.

I cannot stress enough how much fun it is to beat up thugs as Spider-Man, mixing combos with evasions. And there is no other shoe to drop here. The platform sequences, where Spidey swinging through the air by grabbing poles, towers, and ledges play exceptionally well. There are thousands of orbs to collect by smashing both enemies and the environment, which can be traded in to upgrade strength, defenses, and specials. And if you really like to explore – and I did because Spider-Man is such a gorgeous game – there’s a bunch of art books to collect, which unlocks Spider-Man art galleries.

I’ve twice mentioned how attractive Spider-Man is for the iPhone. Though it looks great and runs smoothly on an iPhone 3G, to really appreciate Gameloft’s artistry, give it a go on an iPhone 4. The high-res art explodes off the Retina display in a double-rainbow of color. The music and voice work is also well done.

Spider-Man is both one of the best action games on the App Store right now as well as the best superhero game you can get for the iPhone. The combo-happy combat system is great fun; you&#Array;ll love helping Parker bust chops with a variety of aerial attacks and web grabs. The narrative is well constructed (good writing can never be over-valued), and it looks fantastic. Unless you are strictly only down with puzzles and word games, there is no reason not to swing over to the App Store now and download this phenomenal game.