Saving Yello is the fun and engaging saga of a goldfish with the most wretched kid ever for an owner. It seems this little miscreant likes to take poor Yello for walks and leave him lying around on the floor of her messy, toy-cluttered room. So, it’s up to Yello to get back to his tank all on his own.

If nothing else, Saving Yello has a leg up on Angry Birds because you’re actually trying to save the fish instead of committing genocide on another species. Thankfully, Saving Yello has plenty of other great things going for it to make it stand out among the sea of me-too animal-flinging clones. The game is, first and foremost, a lot of fun.

The graphics help a lot here. The colorful, cartoonish look of Yello and the environments is terrific, lending a Looney Tunes-like quality to the rather sadistic action. To play, hold down on Yello’s tail, and pull back while sliding up or down to aim, and let him rip. The primary objective is to reach his fish tank, but destroying toys and structures along the way earns big points. 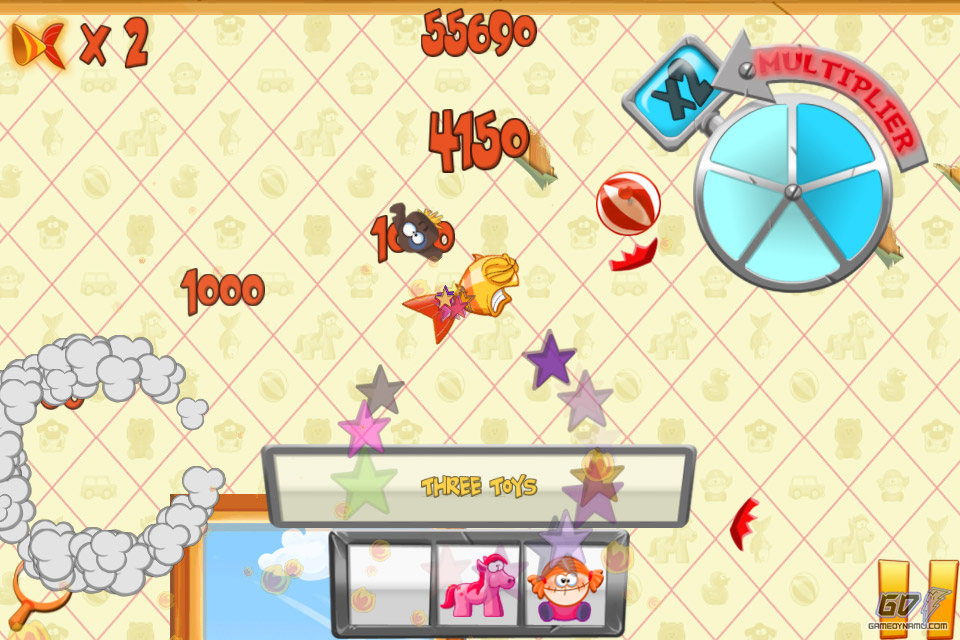 Destroy three of the same toy and you’ll earn even more star power, and most of the levels are brimming with objects to destroy outside of the most obvious path. Maps range from straightforward direct shots filled with destruction to maze-like obstacle courses where the poor fish will have to fling himself up and over walls and cross gaping pits of death to reach his bowl.

To aid the little fella, there are a variety of power-ups to collect. He can catch fire, thus burning toys down, swallow pin cushions that let him stick to walls, turn super cold to freeze things, and even find explosives. There are fish hooks on lines that let him swing across the level, and a wide array of other creative, entertaining, and frequently painful devices to use.

So while there’s nothing truly new or particularly innovative in the overall design of Saving Yello, it still delivers the goods over the course of its 40 levels. A couple nagging issues keep it from complete time-killing greatness. While you can zoom in and out without a problem, it can be difficult to slingshot the fish when he’s at the very bottom of the screen. The game seems to have trouble keeping a hold on him along the level border and doesn’t scroll up a bit more to accommodate.

Also, the toy counter appears right in the middle of the bottom of the screen whenever toys are destroyed, which can obstruct your view of the fish. Such issues aside, for anyone who enjoys the mistreatment of virtual animals in the Angry Birds style, Saving Yello is great fun.