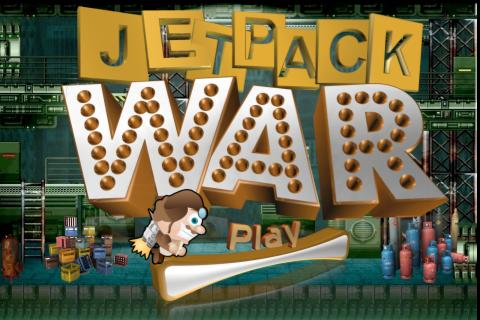 With so many “runner” games on iOS, another one is certainly a hard sell. But there’s a reason these games are so popular. It’s a simple concept — a character moves continuously from left to right at an ever-increasing speed, the player’s goal to jump, slide, or whatever to avoid obstacles. The goal: get as far as possible.

Halfbrick’s latest, Jetpack Joyride, is yet another in a long line of these endless runner games. But don’t let that turn you off. Between responsive controls, colorful sprites that are easy on the eyes, and a clever rewards system that will keep players coming back for more, Jetpack Joyride is comfortably the best in its class.

It doesn’t take a rocket scientist to play Jetpack Joyride, and that’s half of its appeal. Like many iOS titles, its controls boil down to tapping the screen and occasionally, um, tapping the screen some more. You’ll be doing so to initiate protagonist Barry Steakfries’ machine gun jetpack, tapping (or holding) to make him hover in the air as you avoid lasers, missiles, and a maze of electric ropes. As you proceed further, the stakes get hire as Barry moves faster and faster, and the game’s traps become trickier and trickier.

While the machine gun jetpack may very well be the most awesome mode of transport ever in the history of forever, it’s not the only vehicle in Barry’s arsenal. Occasionally and randomly, additional vehicles can be picked up along the way. From the “Crazy Freaking Teleporter” to the Tiny Wings-inspired “Profit Bird” (which borrows sound effects from the popular, money-making iOS title), each vehicle will react to those same screen taps and holds, but responds a bit differently. For example, the “Crazy Ass Teleporter” will allow you to zap to new areas of the screen with a simple tap. The “Profit Bird” is one of the more slower vehicles, but can be made to fly with repeated screen taps, and I found it easier to navigate than many of the others. You’ll come to find your favorites as you experiment and play, but given that they basically offer one free hit (i.e. mushrooms in Super Mario Bros.), you’re going to want to grab ’em when you see ’em.

Halfbrick has also thrown some additional random elements into the mix with bonus coins that appear periodically throughout your journey. These coins can be redeemed in a slot machine after a run (when you hit an electric fence, missile, etc.) and can offer a number of bonuses and perks. Some will even give you a second chance, letting you continue on to reach a higher score. In other instances, you might have a bomb dropped on you to give you some extra distance to reach even higher scores. These basics and the very nature of wanting to best your own high scores (and your friends’ via Game Center or OpenFeint) would be enough to keep you coming back for more. But Halfbrick has also integrated an impressive mission system that kept me playing this simple game for hours on end. At any given time, players have three goals to reach, ranging from hitting certain distances to near-missing X-number of missiles. Completing goals earns you stars, and as you rank up, missions roll over into a fresh set of objectives. There’s always something to be striving for, whether it’s topping the leaderboards or knocking another one of the game’s missions off your list.

There’s also a ton of extras packed into Jetpack Joyride, most of them purchased with coins picked up during gameplay. While some of them are simply cosmetic (my Barry Streakfries looks like a zombie now; what’s yours wearing?), others are more useful in gameplay. One-off items can be purchased, like second chances or distance-boosting bombs, or permanent upgrades like adding a coin magnet to the game’s many vehicles.

There are few criticisms that can be thrown at Jetpack Joyride, but I’d be lying if I said it was a completely perfect experience. For one, the very nature of having to tap the screen with your finger can lead to obstructing your view, and potentially a hazard that will cause your game to end. To the game’s credit, you can tap anywhere on the screen, including a small area directly behind Barry. Your mileage with this may vary, but I never really found a place where my finger never seemed “in the way” at some point.

There’s also a lot of luck involved in Jetpack Joyride, at least when it comes to reaching the high end of the leaderboards, and this may frustrated some. True, the game is all about fast reflexes and being able to keep up with the blazing speeds that Barry can reach. Make no mistake, the touch screen on any iOS device can keep up with the game’s controls, which are quick and responsive. But there’s a bit of randomness involved, as well, particularly when using those bonus coins. My best run came from the sheer luck of getting multiple bomb bonuses and a heart, which earned me a chance to continue on further. Even still, the most skilled players will always have an edge, and will also have that element of luck on their side. At a mere 99 cents, Jetpack Joyride is an insane value for what’s offered. Let’s put it this way: the in-game stats on my iPod tell me I’ve put six hours into the game; include my time playing on an iPad, and you’re adding another two or three. To put that into perspective, I probably didn’t have to play more than 30 minutes of this game to give it a proper review, the game is simply that straightforward. I simply was having so much fun, and I didn’t want to stop.

Speaking of which, I’ve said enough. I think I’ve got some more Jetpack Joyride to play. I’d suggest you get to doing the same.