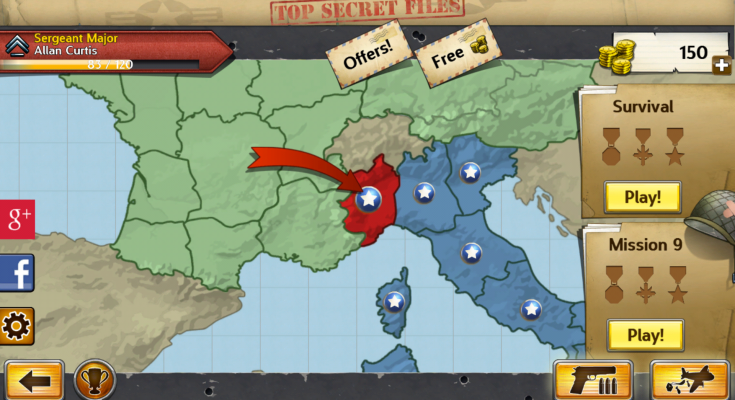 World War II games aren’t a rarity on the iPhone, but good ones are. Hills of Glory: WWII won’t blow you away with state-of-the-art graphics, and it features a bare-bones story you’ll forget before you even begin the level. But what makes this game shine is its gameplay, utilizing basic touchscreen gestures to create an intuitive control scheme.

The setup is simple. You play as the platoon’s new soldier, given the task of protecting your base from incoming enemy soldiers. The top of the screen is your territory, with the enemy coming in from the bottom and sides. Your duty is to outlast the enemy and prevent your base from taking too much damage.

In each level, you control a team of three soldiers, each with their own specialty. Your first soldier is in charge of standard artillery. To fire a rifle at the enemy, you simply tap on your target and your soldier fires a shot. Also, if you see a single-file line of soldiers coming your way, swipe from top to bottom, and your soldier will fire a series of shots down the line.

Other characters have more powerful attacks, but with longer reload times. Your second character will have weapons like mortars, which fire from left to right, or a grenade for use against armored vehicles. Your third character, the powerhouse, can call in an attack helicopter or launch napalm, setting fire to all soldiers who walk through it. 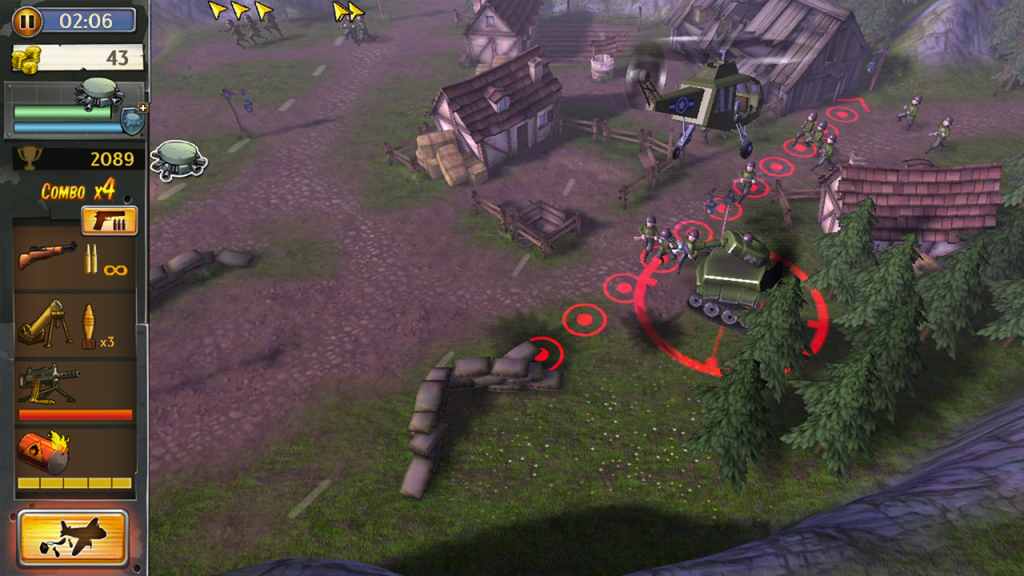 With three soldiers at your command, each with two attacks, you need to remember a total of six touch screen gestures. Luckily, they never get more complicated than tapping or swiping using one or two fingers.

There’s a lot of leveling up in this game, too. Your personal character moves up the ranks based on your score each round. Also, your three soldiers can level up, ensuring stronger attacks.

You’ll earn coins each round, which can be spent on leveling up or buying soldiers. The game also uses dollars, which you earn each time you’re promoted. You can spend actual money for in-game bills that have more spending power than gold.

If you don’t want to spend your actual money on in-game money, you will need to spend time in the game’s “Fire at Will” (or survival) mode. Here, you can use your leveled-up soldiers to outlast swarms of the enemy for as long as possible, and each round earns you more coins and experience.

This system runs into problems when you want to buy new soldiers, but you don’t have the proper level or amount of gold. The more powerful soldiers, with weapons like Tesla bolts or poison gas, often require levels higher than where the game takes you naturally. Grinding takes time, and if you want to get them quicker, you’ll need to buy in-game bills.

While the gameplay is intuitive and easy to pick up, the levels can become monotonous. It would have been clever if the designers had included a moving headquarters or some environmental challenges to switch things up. We can only hope to see these improvements in a future update.

Hills of Glory: WWII doesn’t look unique or tell an original story, but it is quick to pick up and has plenty of unlockable soldiers, each changing the way you play. Although the developers seem to encourage spending more money for these unlockables, if you’re willing to put some time into the game, you’ll surely see some reward.