Get to the finish line before running out of time. That’s the most basic idea behind Gravity Project. Then again, it’s a fairly basic concept at the core of a lot of games so that’s not saying all that much. What mixes things up in this case is all the obstacle-avoidance and gravity manipulation that’s required to get there. It’d be pretty freaking cool, all things considered, if the controls weren’t something of a mess.

After five rudimentary tutorial levels that introduce every single gameplay element one at a time, it’s game-on. Players will be swiping all over the screen in order to leap over barricades, slide underneath obstacles, break through boxes, avoid lasers, and change the entire level’s orientation. The direction of the swipe is what determines the action taken. Up will jump, down will slide, and left or right will rotate the stage 90 degrees in that direction. Depending on the time limit and the length, it might also be necessary to nab special time-boosting icons. Well, if the goal is to actually win at any rate. 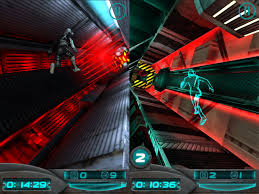 It’s a bit rough in places, but there’s a certain kind of low-budget slickness to Gravity Project‘s presentation. It’s the little details like the way the camera shifts to ths side when running on what used to be the wall, or the the very concept of using special power-ups to increase the time limit. Such a simple idea adds a risk vs. reward dynamic that isn’t usually present in games like this. Being able to string together moves with multiple swipes during more hectic moments (i.e. obstacles that are really close together) is also a very welcome feature.

It all falls apart slightly after “right out of the gate.” The controls practically neuter the experience most of the time. The extremely noticeable lag between swiping up and the character actually jumping can be adjusted to, but that’s about it. After that it’s something of an inconsistent mess. Half the time I can pull off all manner of awesome stunts. Deftly leaping over an obstacle and changing the gravity with one well-timed flip, sliding under something just after a jump, things like that. The other half of the time, my little runner guy face-plants into things because my swipes didn’t register. Typically due to some odd kind of lag that never seems to occur in the same spot.

If it weren’t for the control issues, I’d think much more of Gravity Project. It’s a cool idea and the levels are suitably intense and funky, but a game that requires split-second timing and fast reflexes needs to react much better (and much more consistently) than this.