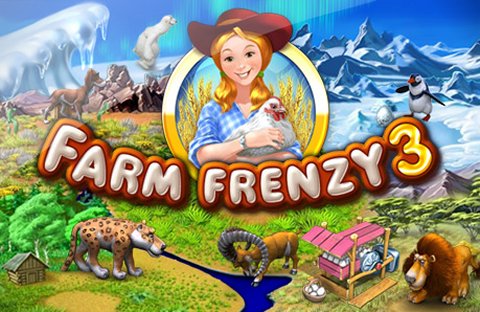 Alawar’s Farm Frenzy 3 is the fourth title in the Farm Frenzy series, a time management game where you have to meet different, and sometimes conflicting, goals like owning five goats or baking 10 cakes. The previous Farm Frenzy Pizza Party may have gotten too complicated for some players, and Farm Frenzy 3 takes a big jump backwards in gameplay, while adding more of a story and some international locations. Sadly, though, the result is also a step backwards in fun. It’s still a playable game, but it lacks the charm of earlier titles.

I’ve liked the Farm Frenzy series from the beginning. The graphics were simple and the animals were goofy, but the gameplay was great. Farm goals were easy to understand, and every level offered a choice of strategies that kept things interesting. The best part about it was the replayability. You had to really push yourself to get a gold on every level, and studying subtle points to shave a few more seconds off was an incentive to play some levels seven or eight times, stretching an already long game into a master course that could take weeks to finish. 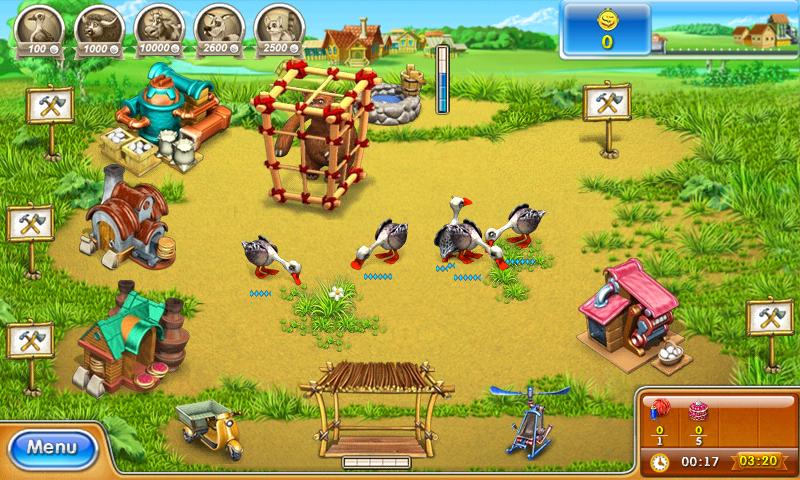 After Farm Frenzy and Farm Frenzy 2 came Farm Frenzy Pizza Party. That moved a little away from the “think fast, click fast” fun of the original by adding very complex recipes. Even the most dedicated FF fans had to play with recipe cards stacked by the side of the keyboard, because no one could remember exactly what went into each flavor.

Farm Frenzy 3 has dropped all that. Most products have only two ingredients, and even the most complex is easy to learn. To increase variety, you play on ingredients different continents, so although there’s an egg layer on each farm, the animals vary from Geese to Penguins.

Graphics are more sophisticated, dropping the 2-D cartoon style for 3-D character drawings with shadows and highlights. Each type of animal eats differently, and watching a penguin flip a fish into the air to catch it is impressive.

But the game itself falls flat compared to earlier versions. First, the more complex graphics really slow down rendering, particularly when items are falling from the sky. Buy nine penguins or get attacked by four lions and everything just stops while the screen slowly redraws itself.

The add-on story slows things down further, with cut-scenes that seem like a clone of every other “plucky young girl takes on corporate bad guy” plot. And the depictions of people from other countries vary from strange to offensive. A woman from Antarctica says things like “Me vote for you.” The African farmer on the map is a bad stereotype from a 1930’s children’s book, complete with a bone through his nose. I was annoyed every time I came back to the map.

In another strange design decision, the helper dogs blow themselves up kamikaze style when they attack bears, instead of just barking to build cages as they did before. As a dog lover, I found this irritating, and I ended up not buying dogs unless I absolutely had to. Again, something that was quirky fun in an earlier title ended up slowing down the game in an unpleasant way this time around.

I also found most levels were impossible to get gold the first time, because I didn’t have all the upgrades I needed. This made the first 30 or 40 levels feel like a tutorial, because I couldn’t get to my real strategies until I had the upgrades purchased. In earlier titles if I missed a medal it was because I hadn’t figured out the correct strategy, and going back was challenging. Here I felt I was set up to fail the first time through, and I just had to slog my way on until I finally had the stronger cage or the bigger warehouse and could go back and do it right.

If you’re serious about getting gold on every level, you can still dig down to the heart of the FF series: lots of strategy choices, and easy ways to test them as you work your way towards perfection. But I only felt compelled to keep playing this time because of my experiences with previous FF games. If this had been the first in the series, I don’t think I would have bothered replaying levels multiple times to get the gold.

The issues with the game will be obvious in the first 10 levels, so you should be able to tell from the demo whether you’ll enjoy it or not. I’m pleased to see them drop the overly complex recipes, but the other “improvements” felt more like a step away from what made the series great.