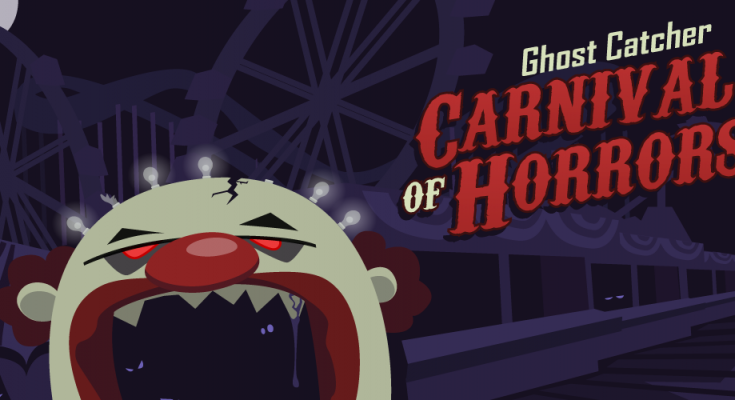 Carnival of Horrors is a typical tower defence game, very akin to the likes of Plants Vs Zombies and Pumpkins Vs Monsters. You create a set of towers in order to thwart the oncoming baddies. These baddies start with fluffy ghosts and quickly level-up to evil clowns, scary bears and all kinds of other side-show freaks. Simple-yet-challenging gameplay is complimented by an eerie soundtrack and massive replay-ability. It’s a game that should be in every ‘Halloween Games’ list from this day forward.

Carnival of Horrors places you as a ghost hunter in a creepy old seaside carnival. Tower-defence style, you must set out your towers (principally telsa coil-type electric shooters and mines) with an accompaniment of tricks to slow the ghosties down. Money to buy towers mid-game is created by small electricity bolts. These come from either lightning or by buying electric generators. The more generators you use the more bolts are generated.

It’s a game that has a superbly rich atmosphere and the zombie-like movement of the ghosts towards your towers is beautifully creepy. As you might expect, enemies get harder as you progress, but you can upgrade your towers and increase their potency, via an in-game shop. A wonderful touch comes by how you can earn in game cash. Some ghosts when you kill them, start to vibrate- if you can get it in time you can place a Ghostbusters-style box which sucks them in. With each capture you earn more cash.

There are three difficulty settings, so plenty to be challenged by and lots of levels to complete. I found the game really quite tricky at times, it’s really not a walk in the park at all! Levels can take some minutes to complete and unlike similar titles, you can’t speed up game play with any fast-forward settings. While I don’t think this detracts from the game, it certainly makes the game less casual to play- you should perhaps put aside up to 10 minutes to complete each level.

I think there is lots of replay-ability in the game and despite testing it for quite a few days now, I feel I’ve only really scratched the surface. With this longevity, and the game’s high-addiction factor, Carnival of Horrors could be something you are compelled to play over and over. 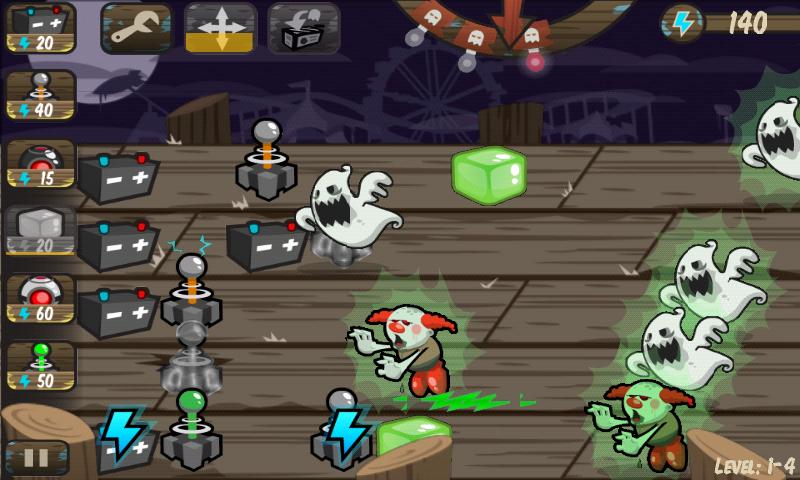 Carnival of Horrors is undoubtedly lots of fun. It infuses that deliciously threatening sense of jeopardy that immerses a gamer into the action on screen. With a variety of towers and extra functions: such as being able to move towers and the ghost-catching box, there’s a wealth of fun to be had and it’s all brilliantly playable.

Very much so. Not only is the game easy to play and challenging, there are lots of levels to tackle as you move through the different areas of the carnival to tackle all manner of ghouls. It’s a game that draws you back into it time and time again and each level feels quite fresh, despite the essence of gameplay being relatively repetitive. The developers have done this by introducing new elements as you progress; a new weapon to use, a new obstacle to deploy… and so on.

Graphics are a markedly 2D, cartoon-style romp. The visuals look about as lush as they could be here too, it’s a very rich environment- well designed and developed. In the version I tested, I did find there were very occasional graphical glitches when the game is paused- sometimes the information panel came up blank with no means to return to the action. This didn’t happen too often but sometimes it meant you had to leave the game and lost that level’s progress.

Carnival of Horrors is a golden example of how game  music should be done. Gorgeously rich and immersive, there’s a real chill to the sound which suits the game perfectly.
Source: bluestacks.com