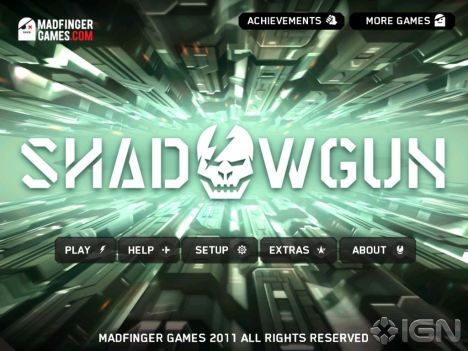 Infinity Blade may be a great AAA game designed specifically for touchscreens, but I can’t have been alone in feeling a little let-down when I first played it, in that the console-esque graphics merely housed an elaborate game of Fruit Ninja.

But it’s not hard to see why Epic and Chair chose that path. Too many ‘traditional’ games on iOS are a chore to control due to the touchscreen’s slippery nature, and more still look like bad copies of what has gone before.

Shadowgun, from Samurai II developer Madfinger Games, isn’t a perfect third-person action game by any means, but those looking for an eye-catching Gears of War-style experience on their mobiles that doesn’t feel like a series of compromises won’t come away disappointed.

Killing in the name of

You, as the titular Shadowgun John Slade, have to infiltrate a mad scientist’s facility, taking down hordes of genetically-altered beasts and security robots while hiding behind conveniently placed chest-high walls.

While the plot may sound like a rejected script for a Jason Statham movie, the game itself is a darn sight more enjoyable, thanks mainly to the well-tuned controls.

On paper, there’s not too much difference between the way Madfinger has approached Shadowgun and the way Gameloft approached Shadow Guardian. One side of the screen handles movement, the other controls your view. There’s a button for firing (which can be held and dragged), one for reloading, and another for weapon-switching. Fairly standard stuff.

Where Shadowgun beats its similarly named rival is in the polish applied to the controls. Movement is smooth and accurate across the board, while the fact that most combat takes place behind walls means there’s no faffing with strafing for the most part.

There’s also no need for extra buttons – cover is handled automatically, there’s no close-combat element, and absolutely no jumping or dashing.

This cutting back of extraneous abilities has the desirable effect of keeping things manageable, even when there are several enemies all gunning for your shadow blood. 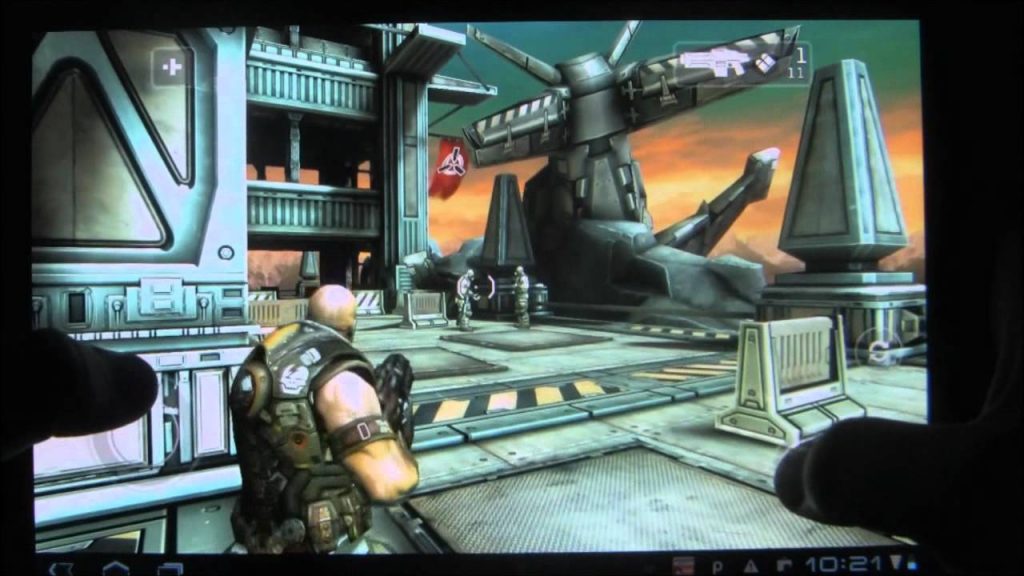 Everything about the game, from the graphics and controls right through to the sound, oozes class. Unbelievably, even the voice acting is entertaining, so while the chugging guitar soundtrack does get a little tiresome after the 50th loop, it’s still worth popping earphones in to hear the exchanges between John and his sarcastic AI, Sara.

Naturally the big draw is the graphics, but while there are a lot of good things to say about the visuals – the textures are detailed and the animations are flawless – this quality appears to have come at the price of variety.

Every level is a mesh of metal and steel, and while there are a few brief moments where you go outside the facility the majority of the game is bathed in the same pea-green glow from the hundreds of gunge tanks the doctor appears fond of.

Set-pieces such as a boss ‘battle’ with a huge digging machine and the excellent variety in the enemies you encounter (including an incredibly annoying one that teleports behind you with a grenade launcher) keep you on your toes throughout.

Little secret icons that unlock artwork and facts are a nice reward for those willing to go off the beaten track, but everyone else should be able to blast their way through the story in three to four hours on Normal difficulty.

This time spent with the game is likely to be, sadly, extended due to crashes. Our iPad 2 dumped us from the game a good five or six times before the campaign was over, often just before a checkpoint after one of the more tricky sections.

There are also moments when ambition exceeds the execution. A set-piece involving two security robots was a little tarnished when they started firing through the walls, for instance, while the sections where you’re forced to run and gun once again highlight the problems touchscreens have with traditionally console game genres.

But despite these hiccups, Shadowgun remains the best attempt to recreate the third-person action game we’ve seen on iOS to date, proving that you don’t necessarily have to ditch a genre just because you don’t have a D-pad.