Rockstar Games released the revolutionary Grand Theft Auto III in 2001, and they’re back again to blow minds with a 10 year anniversary mobile edition of the same game. If you’ve ever played GTA (and I know you have), then you already know how incredibly addictive the game is and how easy it is to play for hours on end without even thinking of stopping. The mobile edition is just the same – I’ve been playing it non-stop for the past day and I still can’t get enough.

I should first mention that this game is currently only available for select phones and tablets. Check the game description on the Android Market to see if your device is one of the few listed. Interestingly enough, I own an unlisted phone and was able to download the game shortly after its release, so you may still be in luck if your device is not supported.

My MyTouch 4G seems to be running the game quite smoothly, so hopefully this list will be updated as more phones are tested. That being said, I do experience some choppy gameplay when a lot of action is going on at the same time.

Now, on to the review!

As I stated before, the game runs pretty nicely on my phone, so I can only imagine that it would run exceptionally well on those devices which are officially supported. The graphics and UI are what you’d expect from Rockstar Games – fun, enticing, and easy to control. While the game seems to be a carbon copy of the console version, the visuals are a bit cleaner and more defined than I remember, which is incredible considering this is the mobile version.

Like all other GTA games, there is a set story to follow. You can either do missions pertaining to that story, or roam free and wreak havoc on the citizens of Liberty City. This game contains the same freedom we all love about titles in this genre and you’ll have no trouble immersing yourself in the dynamic gameplay it has to offer. 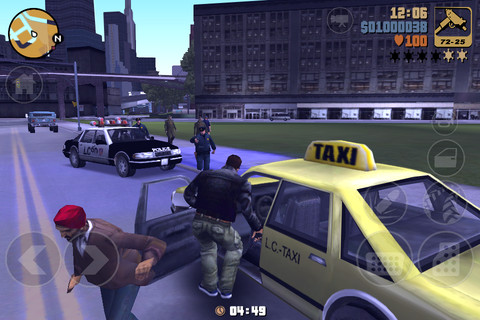 I never get bored of driving around in stolen vehicles looking for trouble to get into. Fortunately, this game provides an unlimited supply of chaos that will keep you coming back for more. Just like the original, the gameplay is fast, exciting, and extremely addictive.

The button layouts provided in game are pretty interesting. When not in a vehicle, there is an analog stick on the left of the screen that controls character movement, and several other buttons on the right that control running, jumping, attacking, and other essential actions.

After entering a vehicle, the button layout changes. On the left side of the screen you have left and right arrow buttons that steer your vehicle, and on the right are some new action buttons that control acceleration, braking, and other things like drive-by shooting. Alternatively, there are several options that allow you to tweak the button scheme to fit your personal preference. 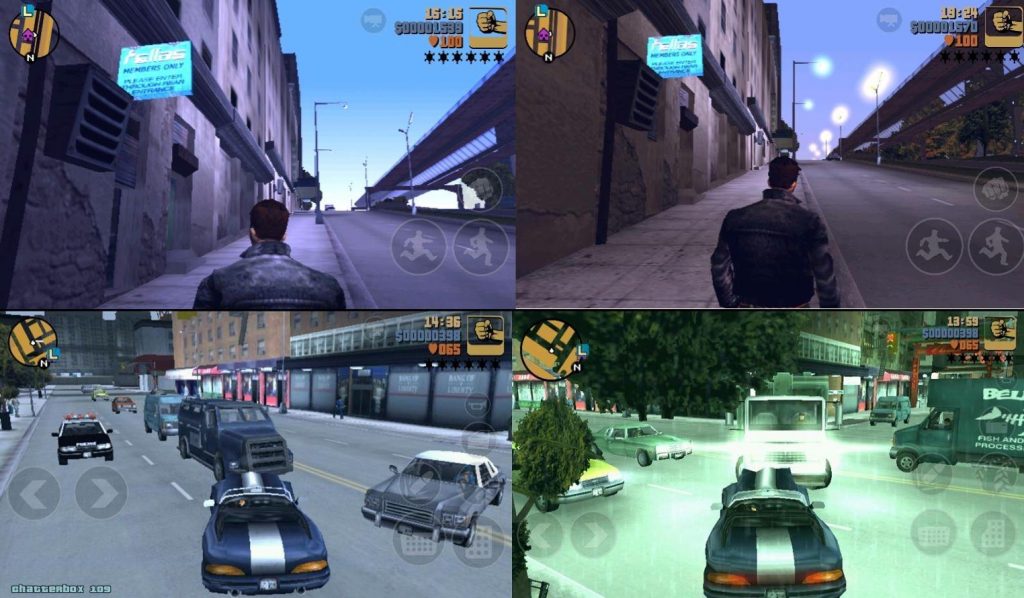 Having last played this game on a console, it took some time to get comfortable using on-screen buttons. I wasn’t a big fan of the vehicle controls at first, but they became easier to use after a bit of driving around. In addition, I had some trouble getting used to controlling my character and mashing the attack button at the same time.

If you’re looking for a game with an incredibly enthralling storyline, or just looking to kill some time, then GTA III: 10 Year Anniversary could be your new best friend. The gameplay is as addictive and stunning as the original with the added benefit of fitting right in your pocket.

My only complaint is that I began to get cramps in my hands after playing for a while. Then again, mobile games generally aren’t that great for marathon gaming. I suppose that’s a good thing, though, else I would probably still be playing now. In addition, I imagine that this game would be much better to play on a tablet due to more screen space. I know it’s a mobile version, but looking at a tiny phone screen for long periods of time is not that great.