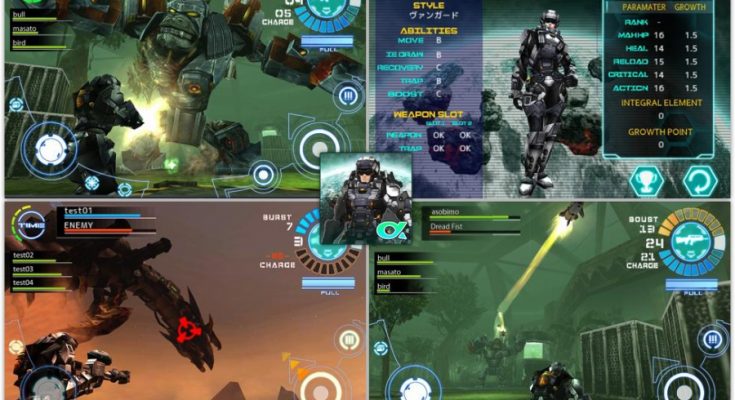 If you’ve been following us for awhile now then you have probably seen us report on games being made by a company called Asobimo. One game we are currently waiting on for an English release, which should be coming soon actually, is Avabel Online. However, another game they have which just entered a new round of beta testing in Japan is Frontier Gunner.

Frontier Gunner is a third-person shooter that also takes the form of an Action-RPG title. Basically it is like a futuristic Monster Hunter style of game which has been in beta testing on and off since April of last year. A new round of beta testing as begun for residents of Japan, as the game is currently completely in Japanese, but the cool thing is that anyone can download the game. The location restrictions haven’t been put in place even though it is supposed to be a Japan-only beta test.

Players will be defending nearby cities from rather large monsters. While there is a single player campaign to play through, the real meat of this game is the multiplayer functionality. As far as we know, you and up to three other players can group up to take down even more powerful monsters. As you complete missions you will unlock more destructive/protective gear. When you do the monsters also scale in power and difficulty.

Like we mentioned earlier, this beta testing phase is strictly for Japan and the game is entirely in Japanese right now. Support will not help you if you are not in Japan. However, you can download the game and attempt to play it. Asobimo usually does all their beta testing in Japan before releasing their games worldwide so if all goes well with the beta phase, we could see Frontier Gunner arriving soon.