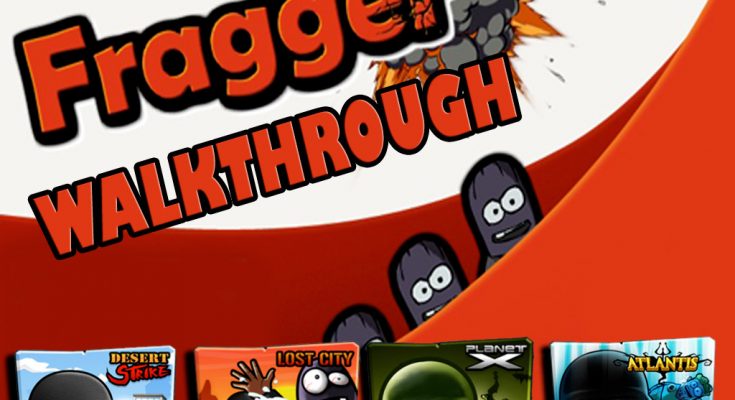 Wow. Talk about an iOS dynasty. It’s been five long years since Miniclip.com published the port of the original Fragger [$0.99] to the App Store. All this time later, Harold Brenes, the original creator of Fragger is back with a long, long awaited sequel, Fragger 2 [$1.99]. I mean, 5 years? That’s ancient history in mobile gaming. Not quite ‘cradle of life,’ ‘dawn of man’ ancient, but still pretty darn old. Ancient Greece, maybe. Anyway, was the wait worth it? Did anyone really want this sequel?

I don’t know if they did, but they should probably check this game out anyway. It is very much like a fine wine. Classical in every way, but improved with age. The art style is infinitely more consistent and professional looking, with three worlds with their own motifs and color schemes; The Countryside, Forest Ruins, and Lab, with 30 levels each. The first 20 or so levels serve mostly as a retread/tutorial of familiar rules and functions. The goal remains the same: toss grenades at goofy enemies while glued to the same spot, navigating environmental obstacles to solve each puzzle. Instead of a three star rating system, you receive a medal if you manage a perfect score. You know, like in Star Fox 64. 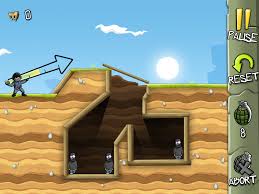 The puzzles are mainly a matter of figuring out which things to blow up first. Wooden planks, exploding crates, rocket boxes and other obstacles change the landscape as you go, blocking some targets and revealing others. Blowing certain things up early might cause a stone wall to block an enemy, or a metal box to fall in the way of your grenade’s path. You’ve got a limited number of throws to complete each level within. You can abort a grenade if it falls somewhere out of sequence, to prevent it from exploding and ruining your day, but that grenade will still count towards your total throws.

The game changing new mechanic is the gravity mechanic, and it is the bee’s knees. The reason for the season. The main event. Added to exploding and rocketing boxes littered about each level are gravity switching boxes. These will make your grenades, loose environment objects, and even enemies fly up, down, left or right, possibly even off the map entirely. Later, in the Lab levels, you’ll also see lasers on the map which can be used to destroy anything, but also act as obstacles to your grenades. Laser switches are noted as red, green, or both, to signify whether the switch has a single on/off use, or if it can be toggled throughout the level. These are very refreshing additions to the otherwise identical formula of the original.

One small drawback to these new shifts in gravity are the controls. They can get really wonky and finicky as you need to spin your throwing arc around in full circles. It’s easier to play with two fingers on the screen at times to make sure you don’t waste any grenades by accidentally letting go of the screen while trying to reorient your hands. Aside from that, the level designs remain clever. Some of the explosive chain reactions you’ll set off are immensely satisfying, and while only a handful of levels were particularly challenging, I was still having a pretty good time throughout.

I don’t know if I found the levels easy because they were, or because of how old this style of game really is. It’s definitely old fashioned, but some might even say outdated. This is both a good and bad thing. Fragger 2 just feels a bit stale after the Noah’s flood of trajectory based destruction physics puzzlers we’ve seen since the original. Miniclip’s own Hambo [$0.99] or Monster Island [$0.99], Ragdoll Blaster [$0.99], iBlast Moki [$2.99], and others. Not to mention the fairly similar Angry Birds [Free] and all of its clones. Respect to one of the originators of this trend, but we’ve played a ton of games in this vein. On the bright side, the pricing is still old school, with no IAP to be seen. That might limit the overall players, but I know many of you on this site will appreciate that.

With all that being said, I still enjoyed my time with Fragger 2 very much. The colorful new style and great new explosion effects are just icing on a solidly designed cake. Whether you’re a nostalgic fan or you’ve never delved into the series before, it’s still worth playing to see how the developer has grown, now making a triumphant return to form from a rough patch in his life. He’ll be updating this game with more levels in the future. It is just a fun as ever to pelt a bad guy in the face with a maximum velocity pineapple, knocking him over like a bowling pin. Download this game and knock me out of the top of the leaderboards. I really do not belong there.