We had fun playing Raging Thunder, a car racing game from Polarbit, and we like flight simulators, so we were excited to check out about Armageddon Squadron, the developer’s “arcade flight simulator” featuring a World War II motif. What a huge letdown.

The title screen is fun, starting you out in a bomb bay. You make menu choices by rotating a bomb, and selecting one wrecks havoc on the landscape below. Once you blast your way into starting a game, you can choose a training mission, start the game’s 12-mission campaign, race in a “time attack”, or jump right into the action in “arcade” mode.

The most compelling choice is the campaign, which gives you a series of missions with different objectives. It’s also the only way to fly a bomber, our favorite kind of plane. One thing we found confusing about the campaign is that it doesn’t seem follow to follow any sort of narrative. In one mission you’ll be bombing Germans; in the next you might be protecting them. A more cohesive story would make this element more enjoyable.

The game’s third-person point of view is different from most flight simulators. You will control your aircraft from a tail-chasing angle. Further, when you select bombs as your weapon, the view shifts downward, to give you a view of the terrain below.

Armageddon Squadron’s degree of simulation is quite different as well, and by “different,” we mean “worse.” Simply put, the planes in Armageddon Squadron don’t feel like they are flying. The attitude of the aircraft in the air doesn’t have much bearing on what they do. Pulling back doesn’t appreciably slow you down, and diving for the ground doesn’t seem to speed you up. What should be tight, energy sapping turns aren’t.

Plus, the exciting dogfights we were hoping for just aren’t there. You can’t perform a barrel roll, make a loop, or pull an Immelmann. The Messerschmidts and Spitfires are sluggish, instead of being nimble and acrobatic. It’s telling that the setting for control responsiveness is labeled “steering”. We know we sound pedantic, but you don’t “steer” an airplane, except when it’s on the ground. 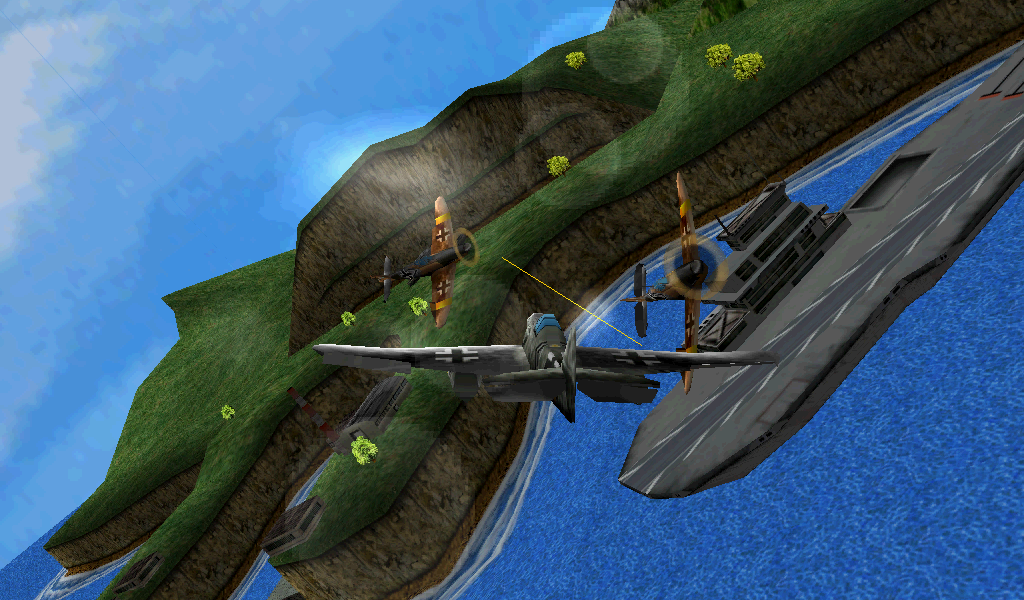 Some of this could be forgiven if blowing stuff up was rewarding. Unfortunately, we found this part of the game to be frustrating as well. The unresponsive controls call for some creative aiming, and the game tries to provide it with an automatic lock on system. However, the auto-aiming has some serious shortcomings. One painfully obvious one: When you shoot at a moving target, you need to shoot where it’s going to be. Well, the auto aiming won’t have any of that. If you’re trying to lead your target, the auto-aim will instead point you towards where the target is right now, making your shots miss wildly AND ruining your attack.

Further, the auto-aim is based on whatever target happens to cross your sights, which can lead to inconvenient mistakes. We found the auto-aim tearing us away from our intended target when we happened to sweep past a different plane while we were turning to make another pass at a bomber. A whole city was destroyed because we were taken off course.

The game’s graphics are frankly pretty lackluster; they certainly pale in comparison to Raging Thunder, as well as some of the other flight-sim offerings on the App Store. The textures are dark and pixilated, and the game’s terrain is very basic. The sound is similarly mediocre. The engine drone sounds ridiculous, and the weapons noises don’t add much to the experience.

We remain convinced that the iPhone will eventually have a great combat flying game, but Armageddon Squadron isn’t it. The game repeatedly gets in its own way, and it fails to provide even a basic feeling of flight. At the current price of $5.99, we advise you to avoid this game. You have much better options.