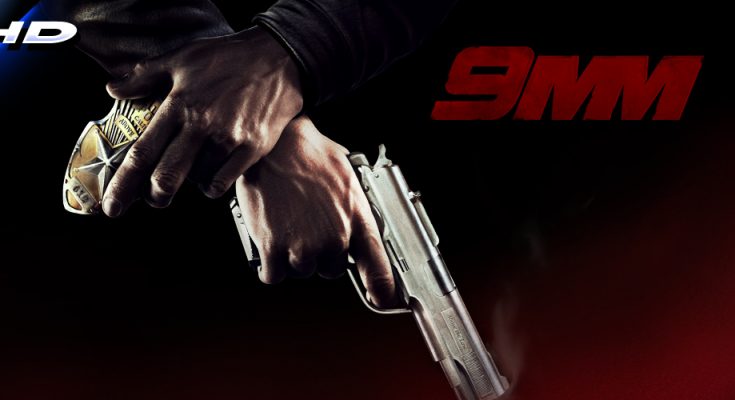 The latest third person shooter from Gameloft is named 9mm and comes with an age restriction (17+) on the App Store for containing sexual content, realistic violence, frequent alcohol and drug use references, profanity and suggestive themes. It’s gritty and naughty, with drug-dealers, crooked cops, guns, strippers and narrated dialog sprinkled generously with the F-bomb. That’s probably enough reasons for some of you to buy it immediately. Sometimes it’s fun to play something with dark themes, but if you object to swear-words or prefer pretty rainbows and ponies, this is not the game for you.

In the single player campaign, you control John “Loose” Kannon (*groan*), a corrupt narcotics detective, who kills a drug lord’s brother and steals millions in cash. This sparks a bullet-fueled rampage as you take down gang members, while trying to avoid being capped yourself. At first glance this game resembles Grand Theft Auto [$9.99], or Gameloft’s earlier title, Gangstar , with a similar over-the-shoulder camera perspective, but it’s actually more like Max Payne, with a linear storyline.

Rather than an open-world to roam with missions, there’s set-pieces to complete as the story unfolds. Markers on the screen tell you where to go next and if you try to go elsewhere objects conveniently block your path, or a message suggests you remain on track. The single player campaign is split into 12 levels, which take roughly 3 hours to complete on easy mode for an average player. But don’t worry, once the campaign’s completed, you can either attempt a harder difficulty (easy, normal, hard and hardcore), or jump into the multi-player modes.

The title, ‘9mm‘, is a obvious reference to the caliber of bullet, so it’s unsurprising that guns, bullets and killing play a central role. There’s plenty of weapons in your arsenal, including hand-guns, shotguns, submachine guns, powerful assault rifles, and more. And if you miss with all of those, just get up close and personal with a head-butt. It’s always satisfying to shoot two enemies with a single bullet and you can carry some weapons in both hands.
Completing levels, kills and achievements earns cash, which can be used to buy body armor, ammo or special weapons at the shop, including explosive ammo, for more impact. Game cash can be optionally brought with real money, as an in-app purchase, but isn’t required. At the end of each level, statistics are shown, including number of bullets fired, enemies killed, head-shots achieved and trophies gained (achievements).

The graphics and cut-scene animations are great. There’s a few graphical glitches, such as the odd floating body or enemy disappearing into a wall and a couple of characters aren’t rendered as well as others, but this happens rarely, so it’s more amusing than annoying. The iTunes description mentions “destructible environments” , however although you can shoot the bottles and boxes or shoot speakers to stop music playing, most items are not destructible. Trust me, I shot plenty of stuff.

The controls in 9mm are straightforward, and will be instantly familiar if you’ve played other similar Gameloft titles. Like Max Payne, you can enter slow-mo “bullet-time” , to pin-point shots and wipe out groups of gangsters, which is often a life-saver. If you swipe across the slo-mo button you’ll dive in that direction, while firing in slow motion, providing your slow-mo meter is charged up by passing time and/or completing kills. Tilt controls can be used for aiming if you prefer. And auto-aiming can be disabled, if you enjoy handling your own weapons. 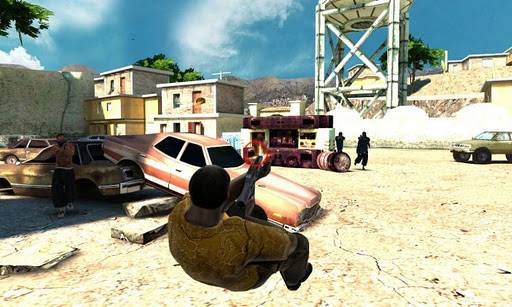 Big tappable icons appear on-screen to pickup weapons, kick down doors, climb out windows, talk to other characters or interact with objects. Simply tap the weapon icon to reload, or swipe to switch weapons. To interrogate gang members or informants, you tap quickly on words and icons which appear on the screen, but the interrogations are certainly not by-the-book and typically involve a bashing. Even the cut-scenes are sometimes interactive, requiring you to quickly tap or swipe to advance, such as swiping to dodge in a particular direction, at the right moment. I did notice the virtual stick could have been used for sprinting, removing the need for that button.

The soundtrack consists of actual licensed tracks from Freeway & Jake One, Beanie Sigel and Apathy, with the first two musicians making an in-game cameo appearance, in a strip-club scene. Be sure to play with headphones, as the game even has bits of 3D audio. On a few occasions, muffled music becomes clear once you kick a door down and you can hear the murmuring of people talking and moving around in the adjoining room, which creates a nice atmosphere and builds up tension prior to attacking.

Gameloft have historically been criticized for poor voice-overs, but 9mm does a reasonable job. The dialog and voice-overs are funny, with many cheesey-yet-entertaining cop lines like “It’s raining bacon” as Detective Kannon jumps through a ceiling window to surprise the criminals below. Although, of course, I omitted the naughty curse words at the end of that quote.